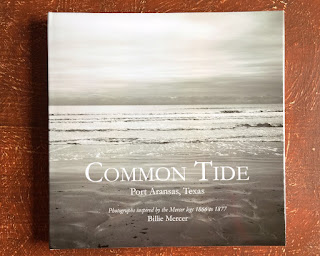 Well, here it is, the book that you have heard about many times over the last eight years.

How did it come to be? It started as an idea of things to do while Ned was going through treatment for cancer. I wanted to keep him busy with fun things. Ned's family were the first settlers on the northern end of Mustang Island in about 1855 and that settlement eventually became known as Port Aransas. We had vacationed there many times when our boys were young, so we loved the island. I told Ned that I wanted to work on a photography book about the island and use the logs or daily diaries that his family had written as a guide in making those photographs. Ned was always willing to go anywhere with me when I pulled out my camera so, April 2011, was the first trip. The trips continued even after Ned passed away. In fact, making this book became more important to me.

Starting in early 2015, I uploaded to Blurb different versions of the book, even had some of them printed as a proof. I wasn't satisfied with any of them. At the same time, I was looking for other publishers, graphic designers, getting estimates, and learning more and more about self-publishing. I was looking for the perfect book and I was looking for approval. Needless to say, I became discouraged and dropped the project for months.

Art and Fear by David Bayles and Ted Orland

In January 2018, I wrote out what I really wanted, a book for my family. I put aside all my concerns about the cost or marketing the book; or what a designer or publisher might want.

Everything I had done earlier was dumped and I started over. I learned more about Adobe InDesign and fonts. Almost every day, I spent time on the book and in late October I uploaded the book to get a proof print. My sons received copies of the book for Christmas. I have to tell you that I'm pleased that I pushed this big project though but now I am excited about the responses I've gotten from photographers and book people. Who knows what might happen in 2019. Maybe it will get published for a wider audience.

What I learned in 2018, and should have already known, is follow my heart and my vision. Just do it!
Posted by Billie Mercer at 9:58 AM