A Memory from Cuba 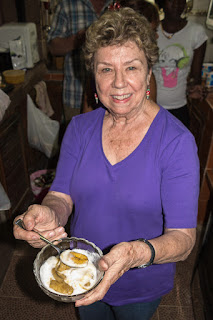 Five years ago, I went to Cuba with a group of photographers. My friend Jim Quinn was part of that group and this week he sent me this picture he had taken of me and it brought back some wonderful memories.

We were staying in a Casa Particular in Old Havana. The breakfasts in the casa were wonderful so one day we asked them if they could also make dinner. The very accommodating hosts said they could. We had a great dinner. So good, in fact, that we asked them to do it again.

By this time my sweet tooth was wanting a bite of a dessert. I had seen bananas with the street vendors, there was an ice cream store on our street, Cuba has rum so I asked if our host had brown sugar and butter. She did although I'm not too sure about the origin of the "butter".  And she agreed to let me make a dessert for dinner.

As soon as I turned on the gas stove I realized why meals took so long to prepare. You could not get a high flame. Maybe it was more than a simmer but not by a whole lot. Nevertheless, I cooked the butter, bananas and brown sugar, then added the rum. There was no flambe to this mixture but I cooked it down a bit and put it over the ice cream that was melting quickly in the heat. It wasn't officially Bananas Foster but it was quite tasty.

Everyone enjoyed it and the host wrote down the recipe. I have a feeling that since then she has served it to her guests from time to time.
Posted by Billie Mercer at 4:31 PM