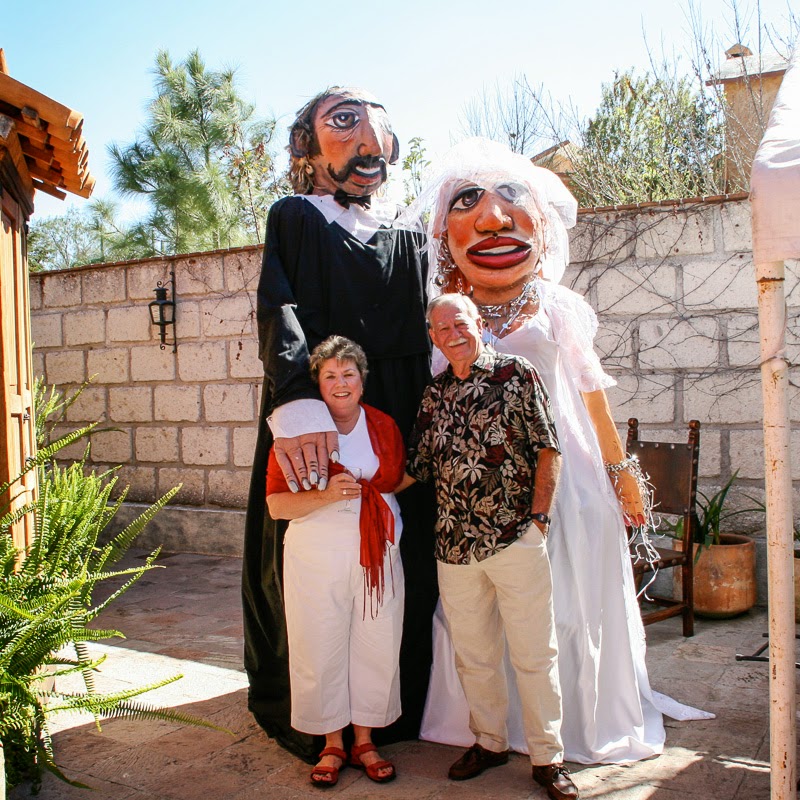 Ned, me and a couple of friends, 50th Wedding Anniversary Party in San Miguel de Allende.
June was the second anniversary of Ned's death. I thought a lot about him but also took a look at myself. How was I doing? And what I realized shocked me. At first I found my shoulders hunched up to my ears and I was tense so much of the time. By the end of the first year I felt more relaxed and I was off on a trip to Europe. I thought I was doing okay. But now that I look back at this year, the second since his death, I am really surprised. I think there has been an even bigger change in the second year than in the first. For want of a better word, I feel that I'm blossoming. Don't laugh at an old woman! No, really I feel such a sense of well-being and independence. I am making decisions and plans for the future and I am having so much fun.

Do other widows find an even bigger change in their lives in the second year of widowhood. I started doing some research about being a widow and found I probably should have done the research right after Ned's death. It looks like there are some good self-help books around. One that especially appealed to me was Saturday Night Widows, The Adventures of Six Friends Remaking Their Lives by Becky Aikman. Aikman found five other widows and they met once a month and did things that were outside of their normal activities. And yes, they talked about their grief but in the normal course of doing other things.

Aikman was thrown out of a grief group because she didn't fit the expected pattern.  It seems that the idea was that the widow should wallow in her traumatic feelings in order to get past them. It’s only very recently that researchers started studying actual grieving people. In Aikman's interview she says, "Most of the prior work was based on theories about what it was supposed to be like. And those who study actual people find that most  people are naturally very resilient and it’s good to focus on positive things and look forward and it’s actually harmful to dwell extensively on painful memories."
Here is the interview with Aikman.

The hospice that helped me take care of Ned asked if I wanted to join their grief group. I said no because I wanted to leave Houston and come home. The sooner the better. But in following my own path of saying Yes to opportunities and trying to do things that I thought would be difficult without Ned, I have focused on positive things even though I didn't read the book. Reminds me of the Sam Cooke lyrics.


You've got to accentuate the positive
eliminate the negative
Latch on to the affirmative
But don't mess with mister inbetween
If you are a widow, I'd love to hear from you. What was the first year like? Was the second year different? I will be surprised if my experience was unique.
Posted by Billie Mercer at 5:05 PM