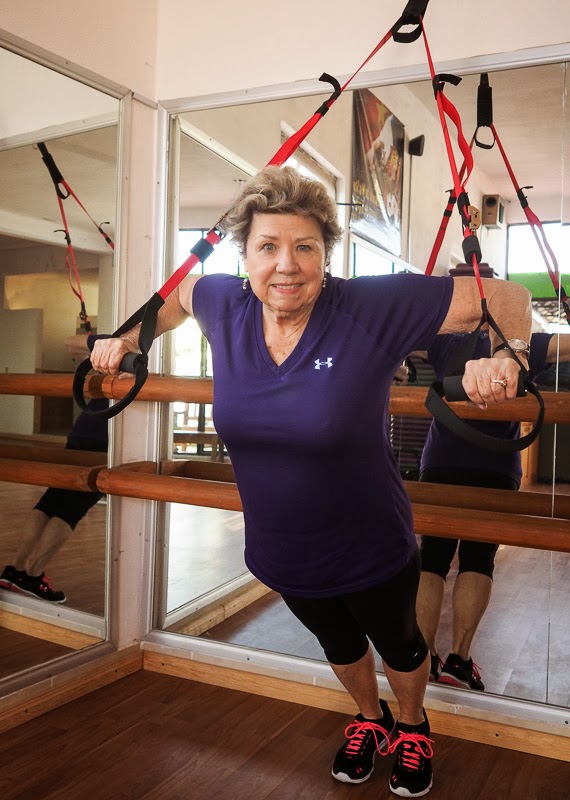 In January of 2013 I had lost a little weight and so my New Year's Resolution was to continue with a healthier diet and hopefully continue the trend in the right direction. I had been doing Yoga for a number of years and while it kept me flexible it really had not done anything to change my shape or help me lose weight. I decided to add some other exercise to my life.

Sometime in January someone posted on the Civil List that if enough old geezers signed up, Crystal Calderoni would start a beginners exercise class for them. Sounded like the way to get into an exercise routine so I said I’d be interested and I waited but I didn't get a notice about a new class. In February, I contacted Crystal and there had not been enough interest among us old geezers so I asked if I could come and observe one of her regular exercise classes to see if I could survive. She said yes. I observed and decided that I couldn’t keep up but at least I would start and see what happened. It had been a long time since I had done weight and strength training so I started with the lightest weights.

I bumbled through the classes for a while but started getting better. About the middle of March a few people asked me if I had lost some weight. I had but I don’t think most people noticed. Also about that time I read the book, Younger Next Year and realized I was on the right track but needed to add more cardio exercise so I started walking UP Pila Seca at least four times a week. I also realized that I was going in the right direction with the weight and strength training but two times a week wasn’t enough.

I had never worked with a personal trainer so I decided to sign up for a few sessions with Crystal Calderoni until I felt comfortable with working out in a gym on my own. Here it is months later and I’m still working out with Crystal, still going to her group exercise class two times a week and still walking up Pila Seca. It sounds like a lot of work and it is, but it has paid off. Now people aren’t asking me if I have lost some weight. They are telling me I look great and asking me what I’m doing.

I have to give the credit to Crystal. She is simply an amazing teacher, motivator and trainer. In a group class, she somehow manages to watch everyone for correct form so you don’t end up with an injury. This is quite a skill because she has people at different levels in the class but she knows that one person needs to do the exercise one way because of a shoulder injury or because they are new and the rest of us can do it the regular way. Her class is never the same which I really like because you are constantly using your muscles in different ways. Some days are weight classes and other days are with the TRX. Once I learned to trust the TRX, I love it. It is hard to do but oh so rewarding.

I also highly recommend Crystal as a personal trainer. She is constantly pushing you to do just a little more and then one day you realize that you have gone far beyond what you ever thought you could do. Again, she changes the routine constantly and focuses on different parts of the body. While I had thought about using the gym on my own, having Crystal there to plan my session, watch me so I don’t get hurt and pushing me beyond what I think I can do has huge added value. One of my sons agrees and he tells me not to think about the cost, just do it. So I try to think of it as a part of my health insurance expense but rather than paying if I get sick it keeps me healthy and strong. I am thinner, stronger and I feel younger than I did last year. Some health issues are gone. At my latest checkup my Doctor was very pleased with my condition and I'm able to delete or cut back on some medications I was taking.

So you may be wondering how much weight and inches have I lost. Let’s just put it like this. I haven’t lost as much weight as you might think but my shape has changed dramatically thanks to being Crystalized, I have had to buy all new clothes. I’ve gone down four sizes in jeans since December 2012.

So what is the plan for 2014? Pretty much the same as last year. Eat healthy and continue my exercise sessions with Crystal. Oh....and also buy smaller sized jeans.
Posted by Billie Mercer at 8:00 PM