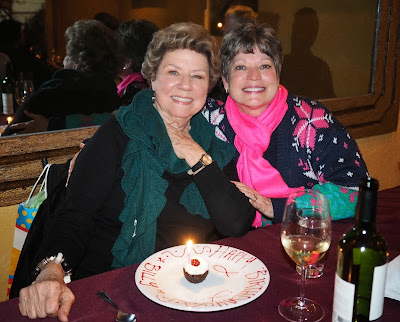 Just in case you wondered what happened. Why no blogging? I've been to Texas and back. It has been an interesting month. Not like most of my Christmas Past but that is okay. Things change. The worst thing about the trip was the weather. It was dreary, windy, rainy and cold most days. Then I come back to San Miguel and it has been dreary, windy, rainy and cold. What's up with the drizzly rain in December in San Miguel?

I had planned to spend five days in Port Aransas working on my Mercer Log project and some friends were going to be there as well so I was really looking forward to it. With a weather forecast of 12 to 20 mile an hour wind and some rain, the friends backed out. I backed out except for two days when I had some appointments that would keep me inside.

I shopped, had lunches and dinners with friends and saw as many movies as I could. At this point I think the best movie I saw was Nebraska but I also like Dallas Buyers Club. American Hustle was a good movie. Twelve Years a Slave was ten years too long. Judith Dench in Philomena gave another one of her great performances. The Coen Brothers latest movie, Inside Llewyn Davis was a downer. The Book Thief followed the book and looked like it was made on a theater set. I still have a lot more movies I want to see before the Academy Awards ceremony.

I went to Austin and saw my grandsons and I planned to go back for Christmas Eve until I came down with a cold/sinus thing. I wasn't bedridden but I couldn't expose my Daughter-in-Law who is in the middle of chemo for breast cancer. I really, really missed being with them. Well, there is always next year.

Mike and family went skiing for the holidays so Christmas Dinner was at my Sister-in-law's house. It was so wonderful to be with them.

Now I'm home. Celebrated another birthday last night with friends who arranged a special dinner at Frienze's. Wow! We had oysters prepared two ways, a pumpkin ginger soup, watercress salad, seared scallops on a bed of pecan rice and a lovely chocolate dessert. The dinner was special and so are the friends. That is Sam and me in the photo but Bob, Tom and Linda were there as well.

Posted by Billie Mercer at 2:21 PM