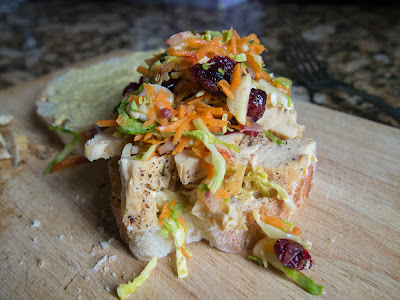 A comment I made on Facebook about making a slaw brought a lot of comments. So, I thought I would try to give my readers a recipe....well, you know MY recipes are more like guidelines because I'm not too good at actually doing exact proportions. With a lot of stuff, that is good enough but it wouldn't be so good with baking. Slaw? I don't think 'mas o menos' amounts is a problem with slaw. I made the slaw one night to go with a chicken breast and I had leftovers so the next day I combined it for a sandwich. It was good both ways but I'll definitely make it again to go on chicken or pork tenderloin sandwiches.

I'm going to give the amounts I used which I think would serve two for dinner or make 4-6 sandwiches.

Dice about 2 tablespoons of red onion in a small dice and put in cold water with a pinch of salt to soak for about 15 minutes. drain and pat dry with a paper towel. Add about half the diced onion and wait until the slaw is put together to taste. Add the remainder if you want a stronger onion flavor.

Cut off the bottom stem end of the brussel sprout and split it lengthwise, Slice each half into thin strips. You can use a mandolin if you have one. I don't, so I slice.

Peel the carrots and grate on a coarse setting. Mix in with the brussel sprouts and onion.

Dried cranberries? I think I added about a handful but you make the judgement on how much you want. They are pretty in the salad but they also add a nice punch of sweet that is really good.

Again I didn't measure how much seasoned rice wine vinegar but it was enough to season but not enough to make the mixture drippy. The same with the oil. It was a drizzle but not a lot. You can always add more if you think you need it after it sits for a while.

Salt and pepper to taste. I usually add a little at this point and then when I take it out of the fridge before serving and after the flavors have had time to meld, I taste again and see if I need to add more.

If you make this slaw, let me know what you think....even if you didn't like it. Also let me know how you would adjust the recipe the next time you make it.

If I served this with sandwiches, I would use a sliced rustic loaf or a baguette and spread a mixture of Dijon and mayo or a garlicy mayo on the bread.