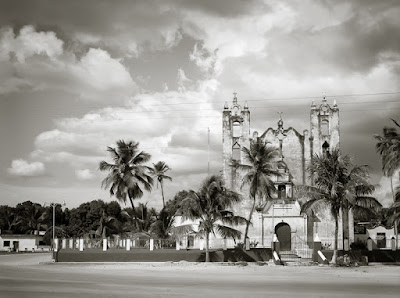 This week I stopped at Banamex on Canal and looked at the current photography exhibition, Armando Salas Portugal, Chronicle of a Trip to the Yucatan, 1946. The photographs stopped me in my tracks because I spent so much time in the Yucatan during the 1990's while I was photographing the 16th century churches spread across the peninsula. Some of Armando's images showed the thatched roof houses and churches that I, too, photographed. Not a lot happened between 1946 and 1993 except that doors were put back on the churches, fences were repaired and painted and the road was paved. I say paved in a most general sense. At least they were no longer sand and dirt but they still had pot holes and lots of topes. Our car moved at a slow place.
The church above is in Hoctun where we met people who had tiendas around the square. We returned many times and I took photographs back to the people we met the first time.
The image below is of a family in another little village. Actually I doubt that it could even be called a village. They lived in the small settlement of a ruined hacienda. The last time Ned and I went to the Yucatan in 2008, we tried and tried to find their house but a new road had been cut through the area and I'm afraid that it wiped out the little settlement.
﻿ 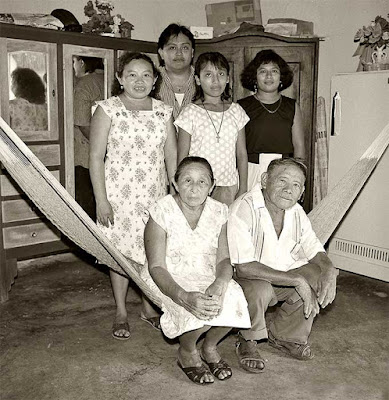 I walked out of Banamex wanting to go back to the Yucatan and follow the maps in the guidebook that I used while I was working on the 16th Century photography project. What has happened to the old two-lane road that connected many of these churches now that everyone travels the toll road between Cancun and Merida? What do the churches look like today? Could I find some of the people that we met back in the 1990's? Could I find a driver? How long would it take?
Mmmm.....can you tell that a seed has been planted?
Back to Armando Salas Portugal and his trip in the Yucatan in 1946. This exhibition covers much more of the Yucatan than just the churches. It covers the beaches, Mayan sites just being uncovered, villages and people. Although I don't think that these are vintage prints, they are beautiful prints and definitely worth a stop in Banamex.
﻿
﻿
﻿

Posted by Billie Mercer at 6:31 PM