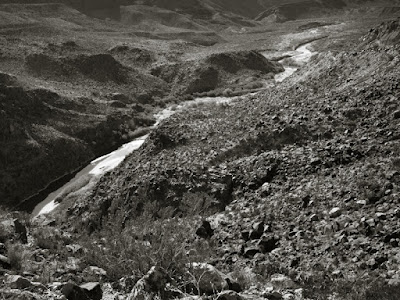 ﻿
This is the Rio Grande as it snakes between Mexico and Texas in Big Bend Texas State Park. The thin line that divides two countries. Everytime we stopped at some vantage point to look at the river, I wondered; "Where are they going to build The Wall in this rugged country?"  "What will it cost?" And don't tell me that Mexico is going to pay for it.

Today, Sunday Morning News on CBS ran a segment on the United States/Mexico border at the small village of Boquillas which is on the Mexican side of the Rio Grande but it had long been an informal crossing point between the two countries. Many Americans liked to visit Boquillas to say they had been to Mexico. After 9/11 the United States stopped anyone from crossing. Now there is a formal Port of Entry for checking in and out with a passport and people can once again cross back and forth. But the informality of going between the two countries hasn't totally disappeared. This crossing is just about a mile South of the Port of Entry and the guys on horses went back and forth several times while we were making pictures from a ridge above the Rio Grande. It felt very old west. 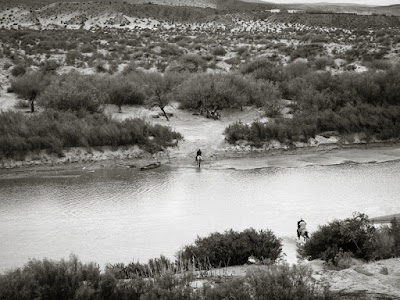 This is facing East from Boquillas toward the Gulf of Mexico. 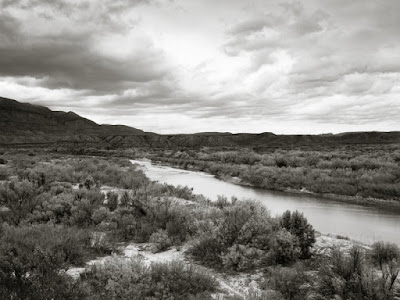 The Sunday Morning News showed the reporter wading in this area at the entrance to Santa Elena Canyon. I doubt it is more than knee deep. I almost felt like they had stood in my foot prints to make their video for the show. But this natural wall between the two countries is a favorite of photographers. With the right light and from the right place I've seen fabulous images. 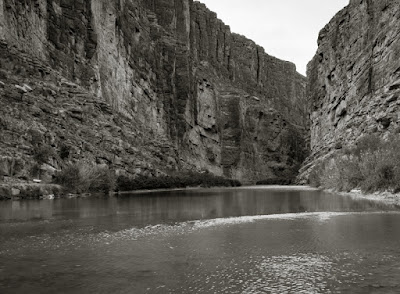 ﻿
I was surprised at the emotional response I had in seeing the Rio Grande from these vantage points. I almost wanted to weep. Maybe it is because I live in Mexico but the United States is still my country. Maybe it was because of the vitriol that is being generated against immigrants during the Presidential campaign. While I was looking at the River I thought that I would write something very political on the blog. I'm not going to do that except to say I hope The Wall does not ever happen.
﻿
﻿

Posted by Billie Mercer at 7:00 PM