A Flood of Memories 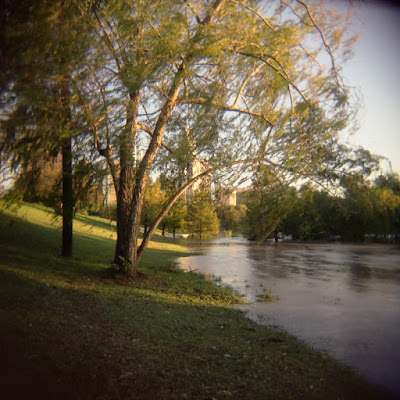 Having lived in Houston for most of my life, I've seen the bayous flood many a time so I started thinking about some of them. One of the most memorable was probably when we were headed to the airport to pick up Son #2 who was coming home for the summer from Manhattan School of Music. It was dark. We were on a two lane road. It was raining hard. The water from the fields on either side of the road started coming over the road. In a few minutes we couldn't go back and we didn't dare go forward. Someone in a pickup truck came along. He said he was headed to the Hog Breath Saloon and he would take us there. He assured us it was high ground. Not knowing how much higher the water would get, although the rain was letting up, it was already coming in under the door so we left the car and went. We didn't want to be "those people" on TV who are sitting on top of their floating car as they are being rescued by the first responders in a power boat.

The Hog Breath was as bad as you might think it would be. Maybe worse. A parking lot paved with oyster shell. Old wooden building on concrete blocks. Pool table and players with an attitude. Bar lit with neon lights advertising beers. Men in jeans and T-shirts with the sleeves cut out. A few pudgy women out of central casting with big Texas blonde hair, tight jeans and tank tops. Loud country music. Lots of smoke. You could feel that they were wondering what the hell we were doing there. We definitely didn't look like we belonged.

About three hours later, our friend Tom managed to come by another route that was a bit higher to pick us up and get us to the airport. That night was an adventure. Wish I had some pictures of the Hog Breath Saloon.

I don't remember how bad the November, 2003 flood in this picture was but usually when Buffalo Bayou floods it is all the way up the embankment to the left and over the four-lane road to the next small embankment. When I made this picture the flood had receded but was still outside of Buffalo Bayou's regular banks. We lived close by and I had been photographing the bayou for a project so I took two Holga cameras and went over to get pictures of some of the flood waters that were still rushing through Houston.

At one point I walked up the embankment where it was a little steeper to get around some mud and the ground started giving way under me. After a trying to make another step or two, I realized I was only making the situation worse so I laid down spread-eagle and got stabilized. I started inching sideways but a little more ground gave way with each schooch. Trust me, schooch is a verb in Texas. By the time I finally schooched onto stable ground my feet were about two feet from the rushing water.

And there was the flood when. . . . .
This blog entry is already too long. I'll save that story for the next Houston flood.

The picture is Buffalo Bayou headed toward downtown Houston which you can barely see through the trees. Buffalo Bayou flows on through downtown and becomes the Houston Ship Channel a few miles east of the downtown area.
Posted by Billie Mercer at 5:03 PM