Last night I watched an amazing celebration at the San Antonio Church. The plaza in front of the church is large and it was full with families who came prepared with stools for the elders to sit on or for the Mom's who were holding little ones. Around the edges there were vendors selling fast food and others selling candles of all sizes.


When we first arrived the music and prayers sounded solemn like many of the Semana Santa services and processions that I have seen in the last week but suddenly fireworks erupted from the roof and the bell towers of the church. 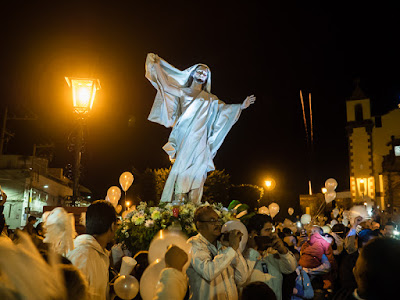 Up from the grave he arose;
with a mighty triumph o'er his foes;
he arose a victor from the dark domain,
and he lives forever,
with the saints to reign.
He arose! He arose! Hallelujah!
Christ arose! 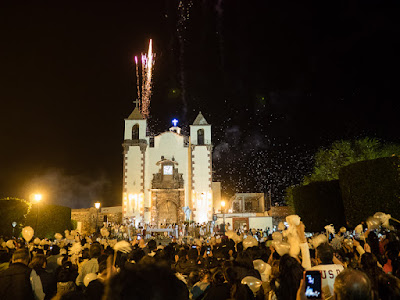 Christ appeared with his arms outstretched and his white shroud loosened and flowing from his body. He was carried on a pallet covered in flowers through the plaza above the heads of the crowd. White balloons soared into the night sky, confetti drifted from the roof of the church as more and more fireworks lit up the sky. The music changed from solemn to snappy contemporary rhythms and everyone was singing and waving white pompoms. On the terrace of the church the priest was leading by waving a pompom and jumping up and down. A young man by the priest was like a cheerleader urging the crowd on.
We watched this joyful celebration for about 30 minutes and it was still going on when we left the plaza. It was the most joyous and beautiful religious ceremony I think I've ever been to.