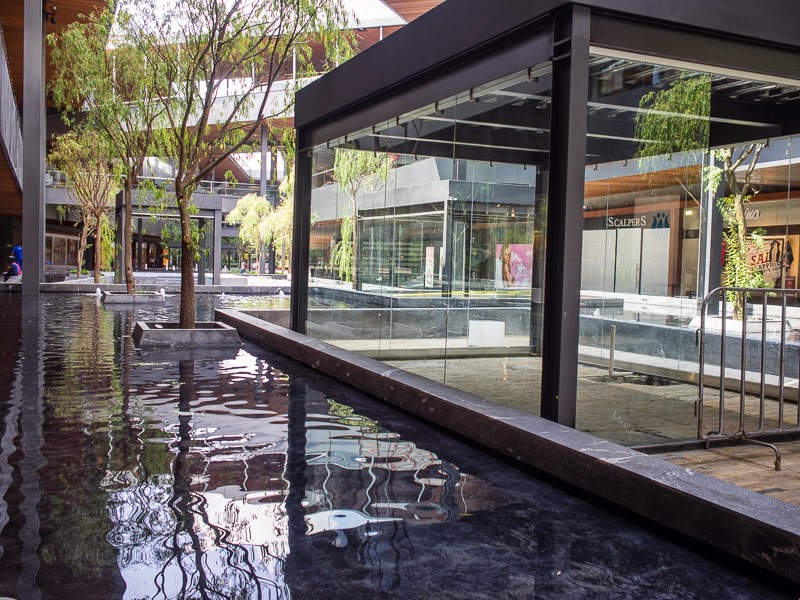 Antea, Queretaro's new commercial development is not a Mall, not a Shopping Center, it is named a Life Style Center. It is suppose to be the largest in Mexico and the second largest in Latin America of whatever you may wish to call it. I will probably always call it a Mall.

I had seen the list of all the stores that would be in it eventually and I had been hearing more and more reports from friends who have been although it is only about three-fourths completed. Crate and Barrel looks like it will open before too long but the other big anchor store, Palacio de Hierro (think Harrod's in London) looks like it is months away from being customer ready. Nevertheless, when I had an invitation from Margo to go with her, I said, yes.

Antea is actually located on this side of Queretaro, just past the Superama on  Highway 57. I use to think the Superama was way outside of Queretaro but not anymore. It is pretty much surrounded by housing developments now. Theoretically, coming from San Miguel the Mall should be easy to get to but it isn't. There is a lot of work on Highway 57 through that area and some exits are closed. Also there is not any signage that gives you a hint of where to get off the highway. I didn't see a big sign that said Antea. Maybe when all the stores are open there will be more signs. You just need to be looking for this clump of buildings and hope you have gotten off in time to enter the parking lot. If you haven't, too bad. There isn't a nearby overpass or anyway to circle around and come back to the Mall without going a long way or making a few very creative and unintuitive turns. But I'm sure that over time that will change. In the meantime, it will be one of those mental agility tests that is suppose to be good for our older brains. 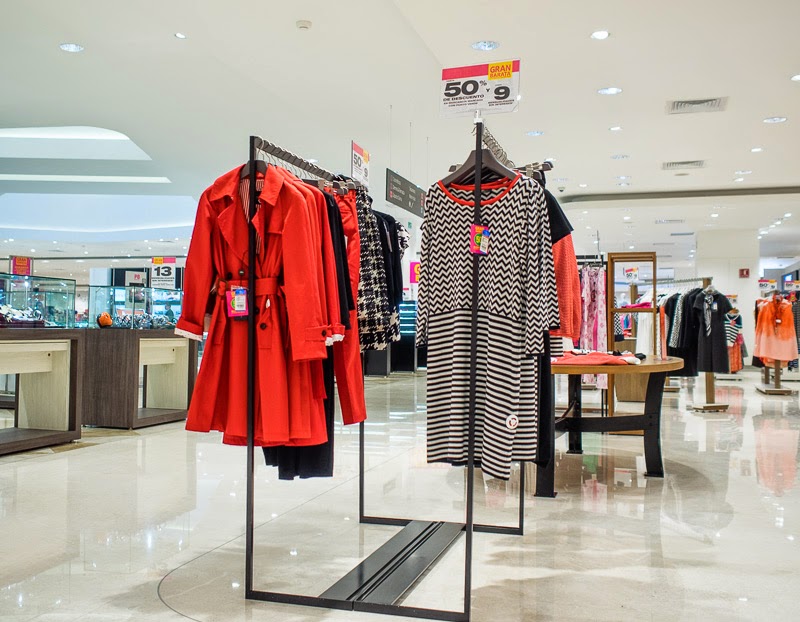 Okay, let me just say it right out, I like Antea Life Style Center. It isn't a covered mall and the landscaping and water features are really lovely. There are a lot of off-shoots from the main hall which makes for interesting walking but might take me a time or two to get my bearings. All the stores do not seem to be made for 20 somethings. There are actually things I would buy. The stores are well laid out and merchandized. And, something I do not often see in Mexican stores except for maybe one rack of clothes, SALES! Yes in that photo with the red coat it is a 50% discount. The sales people were well trained and knew their merchandise. There was a food court with the usual kinds of fast food but there were several nice restaurants also. Liverpool had a fabulous food court in the store on the fourth floor with all kinds of food counters, drinks and wine.

Sometimes I choke on the price of things in Mexico because the price is more than what I figure to be an additional 15-17% import fee if it comes from another country but I am really amazed when goods that are made in Mexico are just as high or higher. I don't think that difference is going to the average worker in Mexico. However, in a lot of the stores the prices were a little more than what I might pay at Bed, Bath and Beyond or Macy's in Houston but not so much that if I needed the item I'd do without it. And in the gourmet area of Liverpool, I found the imported gourmet items like red quinoa or some US salad dressings or preserves to be less than I would pay for them in San Miguel.

I have some suggestions for Antea, put up signage for bathrooms. Get site maps in some strategic locations to help people find their way around the mall.

Oh, another thing, they have started charging for parking. We were there about four hours and the cost was 50 pesos. You have to pay at an automatic machine just outside the entrance, not at the gate as you exit. We found out the hard way.

I'm glad to have Antea and I hope it does well. All and all, life in San Miguel just gets easier and better and better.
Posted by Billie Mercer at 8:05 PM