Okay, so the video is crap. My excuse is that I'm sitting in the middle of the Angela Peralta Theatre, in the middle of the row, in a FULL house, with an iPhone. I can't get up and move closer but I wanted you to know that Doc Severinsen may be 87 years old but that doesn't stop him from blowing that horn. Just listen to the Audio. 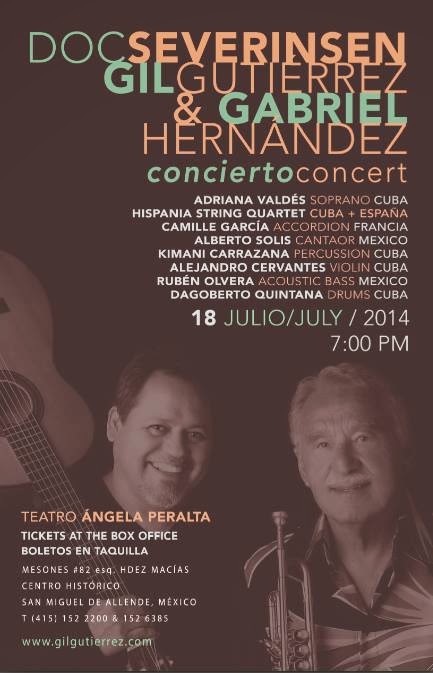 Last night the concert was amazing. It could have been in Carnegie Hall. But it was here in San Miguel de Allende at a very moderate cost to hear world class musicians. At least half of the musicians, 12 in all, were from Cuba. I've seen Gabriel Hernandez with Gil Gutierrez before. Gabriel was on the piano and keyboard and he did the musical arrangements. He is so amazingly musical. A young violinist from Cuba, Alejandro Cervantes, was also amazing. Adriana Valdez  who won the San Miguel opera competition sang several songs. Her voice is amazing as well. I know I'm overusing amazing but it was a fabulous concert.
Mostly Doc Severinsen played a supporting role but when it was time for him to take the lead there was no doubt that he could still do it. What a joy music must be for him to continue to play and to keep meeting and playing with world class musicians, some of whom are less than half his age.
While we were in the theatre there was a rain storm and it was still raining lightly when we got out. I was glad that I had a ride home because cabs would have been hard to come by since it was the weekend and just across the street from the theatre was a Blues/Jazz concert and it too was breaking up. So much to do in San Miguel. At any rate I got home safe and sound and went to bed with the rain on the window and the concert still playing in my head.
Posted by Billie Mercer at 11:48 AM