The Lunch for the Ladies 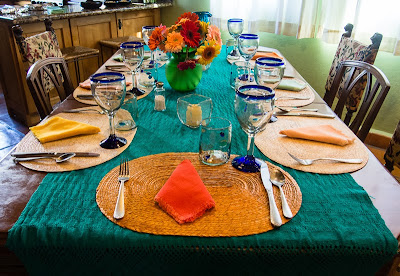 It was time for a Ladies Luncheon at my house. I had a menu in mind so I invited The Ladies.

The menu wasn't a difficult menu. It was recipes I had cooked before but the preparation turned out to be a little difficult.

I've written before about how the best laid plans can go awry when you have a menu in mind here in SMA but you can't find the ingredients when you need them. That happened. I started gathering supplies early so that I could readjust if I needed to. I bought the cheese, tomatoes and the stuff for the ice cream early in the week. And while I was shopping I stopped at the oil and vinegar store to buy a wedding gift. I found a raspberry balsamic vinegar and the information about it said it was great drizzled over premium ice cream. Well, my homemade ice cream is definitely premium...at least in my opinion. So I decided to use it instead of the Hot Fudge Sauce.

Every time I pass by the veggie man at Espinos he has leeks. He had leeks on Tuesday but when I wanted to buy them on Wednesday, he didn't have leeks. He assured me he would have them Thursday. He did not have them Thursday although he assured me that they would be there soon, like 15 minutes. Mmmm....my inner voice was saying don't wait. I hopped into a taxi and headed to Mega. Thank goodness they had some great looking leeks.

Now it is time to cook. I've made the bacon and leek tart a number of times and although I'm not good with crusts that savory tart crust recipe has always worked so well. Not this time. It was a mess with cracks across the bottom. But at this point I had to go with it. Then I made the filling. I'm making two tarts so I need to double the filling. I doubled the bacon, leeks and cheese but with the custard I only made one recipe. This didn't dawn on me until it was already in the oven cooking.

Well, the bottom line is the Tart was okay. The Ladies liked the lunch. They thought it was colorful on the plate. And the ice cream with the raspberry balsamic vinegar drizzled on top was a big hit.

The best thing about the luncheon was the conversation. Mexican politics. US politics. Real Estate...you always talk about real estate in SMA. Health and Medical Care. Travel. Yes, we covered some of the same subjects we would have at a dinner party with the husbands present but there was a difference and I can't exactly find the words to describe that difference but it was good conversation.

In spite of all my trouble putting this luncheon together, I want to do it again. Soon.