As usual when I come to Houston I follow a weight gain plan. I can't help it. Houston is one of the great restaurant cities in the USA. I always have to hit some of my favorites and try a few new ones as well. 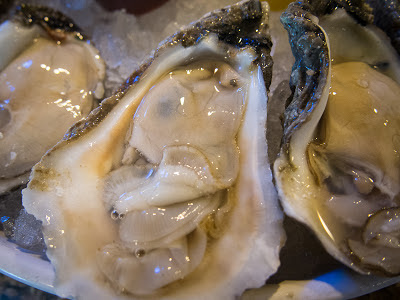 I'm sure that anyone who followed Billieblog isn't surprised at seeing raw oysters when I write about eating in Houston. This is from my usual place, Goode Company Seafood. I wasn't sure I was going to have raw oysters because May isn't a month with an R in it. But I went and sat at the end of the bar where the oysters are being shucked right before your eyes. The Shucker wasn't eliminating very many oysters when he hit them with his knife. I'm not sure what sound he hears that means it isn't a good oyster but I always figure it is good sign if there are very few oysters in the bag that are thrown away. I also checked out the size of the oysters. I don't like them really, really big but then I did not want to order a dozen if they were as tiny as clams. Everything looked good so I ordered a dozen oysters on the half shell. Oh my, they were really, really good. Another day I stopped at Goode Company for the Campechana which is a giant seafood cocktail of shrimp and crab. Oh, so very, very delicious. 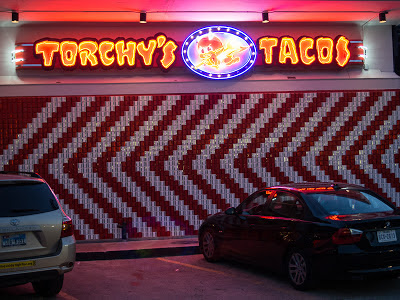 My Dear DIL took me to Torchy's Tacos in Rice Village. I had a shrimp taco and it was huge and very tasty. I like the tacos better that Berryhills. It is a franchise that I think started in Austin. There is another Torchy's or two in Houston and I predict that if you are in Houston or Austin you will probably have one near you before too long. 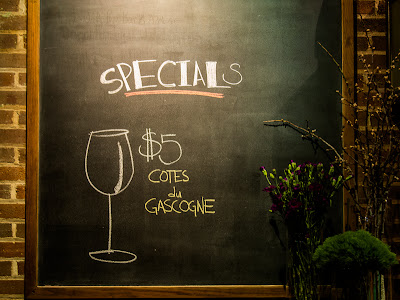 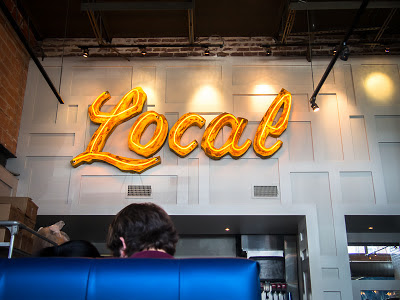 Local Foods on the corner of Kelvin and Dunstan in Rice Village is a fairly new restaurant that focuses on local products. My favorite items at Local are the Coconut Thai soup and the Banh mi sandwich along with two amazing sides. You always have a choice of seven or eight sides but I usually have the kale raisin salad. I know that there are a lot of other tasty things on the menu but I've never been able to go there without ordering one of these two things. The problem is that the Coconut Thai soup is a random daily special. I've been known to open the door and look at the menu board just to see if I can get the soup. 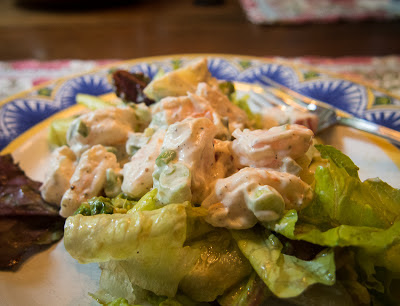 Okay this shrimp salad isn't in a restaurant, it is lunch at a friend's house. Life can't get much better than visiting with a friend and then joining her at her table for a delicious lunch.

I've eaten at a bunch of other places as well. I don't have a scale to step on and I'm not sure I'd want to. I'll get off my Weight Gain Plan when the plane touches down in a few days in Mexico.
Posted by Billie Mercer at 6:24 PM