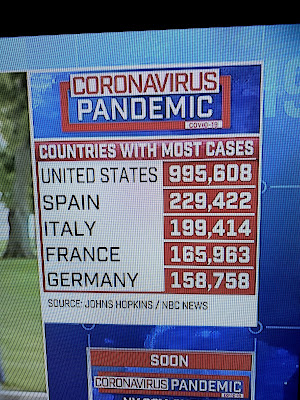 Yes, I know this isn't a very good iPhone shot of a television screen but it will serve as an illustration for my frustration with the "statistics" that the news channels keep posting about the pandemic. They like to post total numbers. I'd be more interested in what is the percentage of the population who have been diagnosed with the Coronavirus. The USA number is alarming as compared to Spain, Italy, France, and Germany. On the other hand, when you look at the percentage of the population that have had the disease, we still have the second-highest percentage but it is a more relative number in how we rank with other countries.
I'm still alarmed. Why doesn't the USA have the lowest percentage? We are more transparent? We have tested more of our population? Are we comparing apples to oranges due to testing procedures in these countries?

Posted by Billie Mercer at 2:18 PM