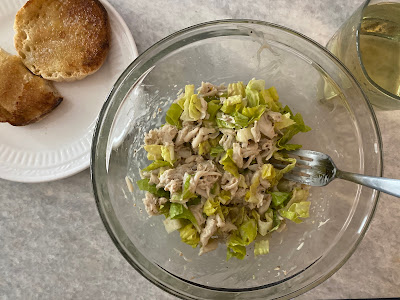 Lucky me! My son Mike, brought me a 16-ounce container of crab meat. He knows how much I love crab. I've been known to sit at the table picking and eating crab and drinking a bit of wine for hours. I could be by myself but it is even better if I am sitting with some other people just picking, eating, drinking, and talking. A crab feast was something Ned and I loved to do when we could find nice fat gulf coast crabs. Although I've seen crabs in markets in San Miguel, they weren't lively. I did not buy them. Now that I have crab, I wanted to savor it so I spread it out over three dinners.

The first night was a salad with crispy, icy-cold hearts of romaine lettuce with Cesar dressing topped with crabmeat. The second night I made a cream of corn and roasted poblano soup topped with crab meat. I had to improvise on the soup. Back in San Miguel, I have a recipe from a cooking class that Ned had gone to. I looked online but none of the recipes seemed exactly right so I took a bit of this one and a bit of that one. It was good but it wasn't as wonderful as Ned's recipe. 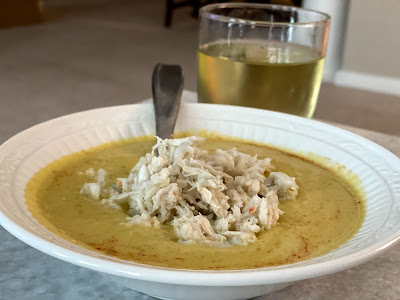 For the last bit of my crab, I wanted to replicate the sauce that Goode Company Seafood uses in one of my favorite things on their menu, the Campechana Extra shrimp and crab cocktail. No recipe but that did not stop me. I roasted tomato, green pepper, and onion and then I chopped it up in the blender. Added some catsup, lime juice, jalapeno, salt and pepper, and a little tabasco. It was too thick so the recipe needs some more tweeking. The crab meat was tossed with the sauce and topped with fresh avocado. 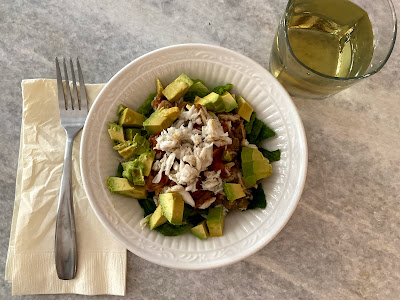 I cleaned my plate. All. Three. Nights.

Posted by Billie Mercer at 4:44 PM