Photographs Don't Lie. Or Do They? 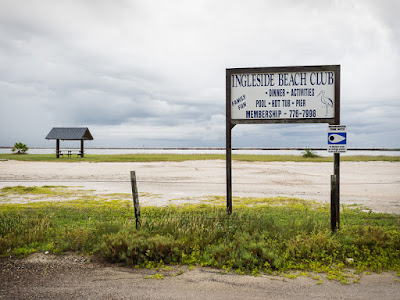 Recently when I was in Port Aransas on a rainy day, I decided to take the ferry over to the mainland and drive over to Ingleside. I have been on that road before but it was a long time ago. I thought I might find something to photograph in the drizzly rain. In Ingleside I saw a sign that said Ingleside by the Bay. I turned left on it thinking I might get a shot of Port Aransas from the other side of the Bay. For about ten minutes there was no sign of the Bay just the road through the wonderful wind twisted oak trees. And then, there was a sign pointing to the right, Ingleside by the Bay. I turned right and I was in a little community about four streets deep rising from the water's edge of a little inlet and maybe a three-fourths of a mile long until the streets ended at the bay front that faced Port Aransas.

The street I was on ended at this sign. Ingleside Beach Club. I did a double take. Beach Club? Sand and a couple of covered picnic tables. I'm sure the overcast sky had some influence on me but I was thinking what a sad excuse for a Beach Club. I pulled over and stopped the car and I made several pictures of the sign and the picnic table. I had to capture this sad scene. I put the camera up and got back in the car and as soon as I turned left, I saw another building inside of the fence but about the equivalent of two blocks away. As I drove toward it, I saw posts for volley ball nets and space for parking and a pier. As you have probably guessed by now the building I saw was the Club House. It wasn't grand but it was nice. I stopped again and closed my eyes and I could see families fishing from the pier, playing volleyball, horse shoes, picnicking, eating on the veranda, New Year's Eve Parties in the Club House, Fourth of July cookouts, wedding receptions. This was not a sad place, it was a place where families made wonderful memories.

If I only showed you the image above and I had not given the whole story, would that image be the truth about the Ingleside Beach Club? I didn't Photoshop anything in or out of the picture. It is a "true" picture.

Ever since I made this image I've been thinking about it and this week I saw an article in Shutterbug about six professional photographers who were assigned to make a portrait of the same man but each of them were given a different story about the man and they had 10 minutes to make their portrait. At the end all six of the photographs were hung and the differences in the portraits were astonishing. The way the man was posed and light was used was highly influenced by what was in the photographer's mind from what they had been told.

Now I can think back to how I was feeling the day I made this image and why I had to stop the car and take this shot. For me it confirms what the article is saying, "The photograph is shaped more by the person behind the camera than what is in front of it."
Posted by Billie Mercer at 3:29 PM