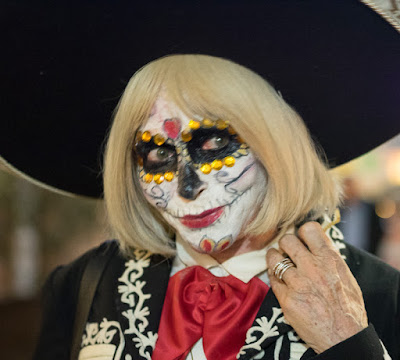 I innocently went into town last night with my camera and a bag of candy. It was Halloween and I was remembering all of the Halloweens when Ned and I made reservations for dinner and after dinner went to the San Francisco Hotel and sat in the bar where we could see out the door. The first few years there would be a few children who painted their faces or wore a costume that they probably also wore in the Locos parade. They were out looking for candy from the gringos. Sometimes it would be three or four boys about seven to eleven years old running in a pack. Or it might be an older sister shepherding her siblings and that might include a wide-eyed three year old on her first Halloween adventure. So cute. A few of the groups would notice us sitting inside the bar having a margarita and they would rush in holding out their plastic grocery bags for candy afraid that the management would rush them back out before they got their treat. We wanted to talk to them but all they wanted to say was 'hola' and 'gracias' and run back out to collect more goodies.

Then we started to see a few adults who were on their way to a party dressed in Victorian costumes with painted skeleton faces. But basically the Jardin was maybe a bit more crowded than most nights but not much.

Well, friends, things have changed and changed more than I realized. Now there are any number of Calaca events. Calaca is a colloquial Mexican Spanish name for skeleton or skull and you see it used mostly during events for the Mexican Day of the Dead festivals. Here in San Miguel it has turned into a three day holiday of events that are mostly initiated by the gringos. That is not to say that the Mexicans don't participate as well because I saw a lot of school children and young people wearing the calaca makeup but the gringos do seem to having a great time with the costumes and parties.

As I said, I innocently went into town about 5 PM expecting last night to be about the kids and candy. The Jardin was already very crowded. I can't imagine what it was like by 7 PM. I didn't stay. I walked on out to Fabrica Aurora for their art event. Surely if the Jardin was that full of people the Fabrica would not be so crowded. I was wrong again. It, too, was packed with people and Calacas. I had a great time wandering from studio to studio, looking at the art and stopping along the way to talk with friends.

Just about the time I decided that I better try to get a cab and head back across town I met my foto friend, Sally. She was ready to leave as well and invited me to join her for dinner at Don Lupe Grill with some other people that I knew. It was a fun Halloween but very different than what I expected.

In some ways I'm sad about the changes that are happening around Day of the Dead. As I thought about it after I got home last night I also remembered that I had gone to the cemetery yesterday morning and the traditional things were starting to happen. Trucks were coming in loaded with flowers, food and flower venders were setting up their tents. Families were starting to clean graves and repaint the names on the tombstones. Families were greeting friends and walking with each other to their family gravesites. The vendors of the sugar skulls and little animals are set up in town, the bakeries are baking the traditional bread and families are getting ready to make their home altars to honor and remember their loved ones.

So, in a sense, the Calaca festivals are like another layer on the traditional celebration of Day of the Dead. And I think I like the Calacas better than the connotation that Halloween has of haunted houses, malevolent ghosts and goblins who are sinister. The Calacas who walk among us in San Miguel, although they do remind us of death, are not evil spirits who are out to do us harm. Well, no harm unless we have one to many drinks with them at the festival.

I'm working on an altar for Ned. Yes, I have the tequila bottle sitting on it. I still need to buy some Snickers. I can't have him dropping by and not have Snickers for him. Snickers and tequila. That was my Ned.

Email ThisBlogThis!Share to TwitterShare to FacebookShare to Pinterest
Labels: Day of the Dead, Death, Festivals, Ned