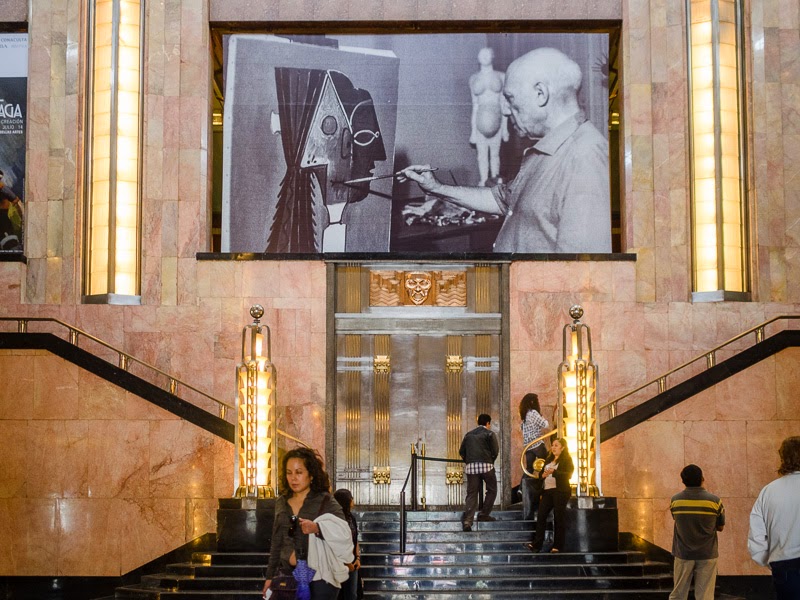 Last weekend I was in Mexico City. What a great city. I took the bus there for a birthday party but as long as I was going to be there I stayed a few extra days. Margo from San Miguel also went for the party and we were staying at the same place, The Red Tree House in Condesa. Margo goes to Mexico City often so she became my guide to the public transportation system. While I don't have it all figured out, I've got a few of the basics so at least I can get from the Condesa/Roma area to the Zocalo or Bellas Artes or the Saturday Market.

I really like the Metrobus because you can see what the neighborhoods are like. The bus passed a huge Liverpool. For those of you who don't know, Liverpool is a department store like a Macy's. The one we have here in San Miguel is very small with a nice but limited selection. So, if I need to do some serious shopping, I can always just run over to Mexico City. Just kidding. In Queretaro about an hour away, a new shopping center has opened. Oops....it isn't a shopping center it is Antea Life Style Center. And it is said to be the largest shopping center or Life Style Center or mall or whatever you prefer, in Mexico and the second largest in Latin America. There is a Liverpool in it with about 100 other world name brand stores that you would recognize like Calvin Klein or Crate and Barrel. I haven't been there yet but hope to go this week.

Back to Mexico City. I had a fabulous time. I went to the Bellas Artes and saw Picasso Revealed by David Douglas Duncan. Duncan, an American war photographer, lived with Picasso many times while he was in Europe. He photographed Picasso at work and at play. The show was a juxtaposition of his photographs along with Picasso's drawings, ceramics and sculptures. One thing that really interested me was the many drawings that Picasso made of his studio especially the end of the studio that had three windows. They were the same studio but all different. It made me think of two artists who have focused on the same thing over and over. For example, Monet and the haystacks and of Josef Sudek and the many photographs he made of the window in his studio.

In a video of Duncan talking about Picasso, he tells that after he had made 1,000s of photographs of Picasso, he asked him if there were any that he would not want published. Picasso said something like, I paint. You photograph. You do what you want with the images.

Also at the Bellas Artes was a small exhibition of the photographs of Robert Doisneau, who was a contemporary of Henri Cartier Bresson.

What a thrill for me to see two wonderful exhibitions. But wait, there is more! I walked a couple of blocks from Bellas Artes to Palacio de Cultura Banamex on Madero and saw a fabulous exhibition of the Architecture of Mexico, 1900-2010.

Then my great accomplishment of the day....I found my way to the big Metro Station by Bellas Artes, found the line I needed going in the direction I needed to go, changed trains at the right station and got off at the right stop. The hardest part of all of this was figuring out which way I needed to go once I came up from the subway to walk back to the Red Tree House. I was confused but then I remembered my iPhone. No problems, the little GPS guided me right to Culiacan #6.

Posted by Billie Mercer at 1:12 PM