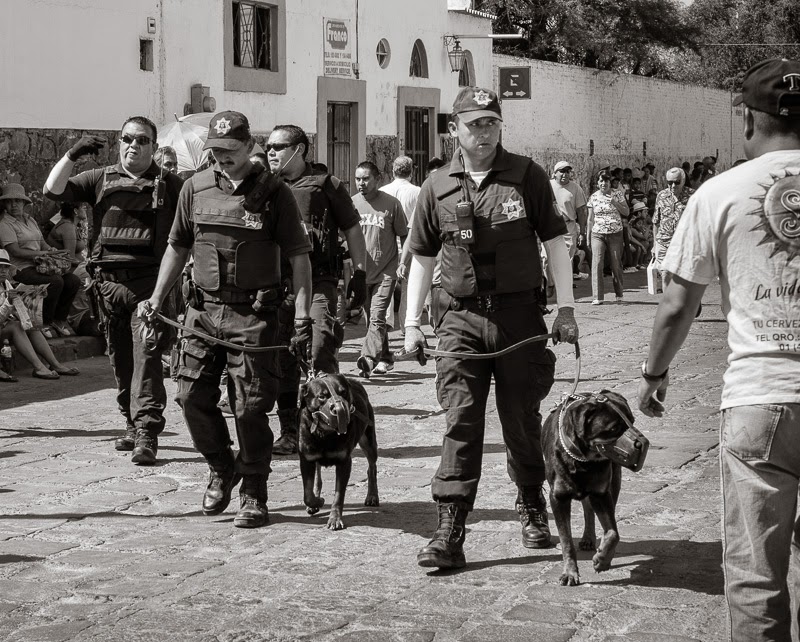 Last week at the Locos Parade these policemen were stationed on Ancha de San Antonio near the start of the parade. Seeing their uniforms with pockets for equipment, bullet-proof vests, boots and communication gear reminded me of 2006 when we helped a friend after she had been assaulted. The police guys at that time were skinny young men who looked to be about 18 years old. They had pants and a shirt that said "Police." One of them had the stub of a pencil and one tiny piece of paper to write on but that was okay because his ability to spell and write were very elementary.

A lot has changed in eight years. Today, the policemen and women are men and women who look like they can handle themselves in confrontation. This was the first time I had seen them with dogs and these are some serious dogs. Shortly after I took this picture I saw them take the dogs over to a hotel and get a bucket of water for them. The next time I saw them, they had a man with his hands on the wall and his feet spread. Oh my God, I thought, what has he done. They frisked him and two of them were talking to him sternly. Then they stepped away, turned him away from the parade area and motioned for him to go. He staggered away. Oh, so somehow in the crowd they had seen him, figured he had been partying for too long so they sent him on his way and away from the families at the parade.

There are so many things in Mexico that are different from the US justice system and I'm not going to try to explain my understanding of those differences. However if I need the police, I am glad that they look like they have training, the ability to handle themselves and equipment. And I'm hopeful that the improvements will extend into all areas of the justice system.
Posted by Billie Mercer at 7:13 PM