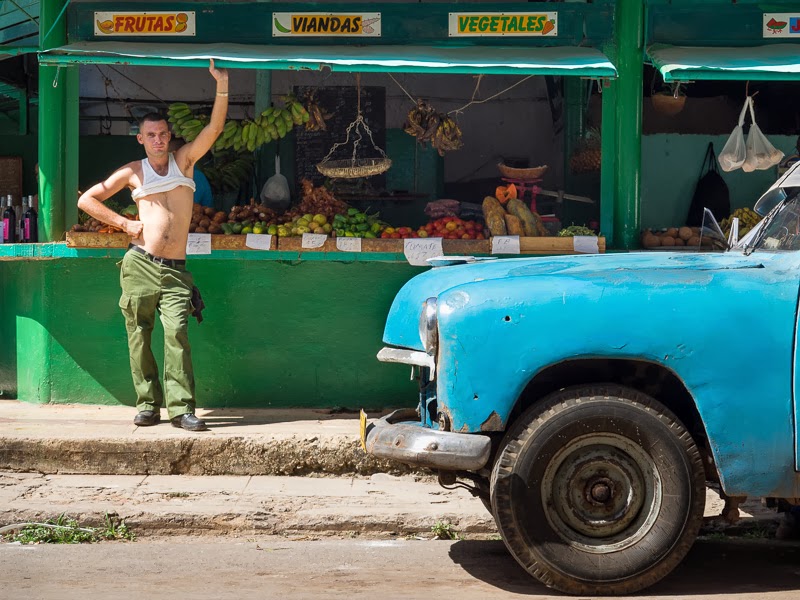 Every living room, bedroom, corner, doorway or window seems to be a business opportunity for a Cuban these days. Of course, I don't know what regulations these small businesses have to comply with in order to operate but I understand that it has only been in the last couple of years that having a B&B, or fruit stand or meat market or a window where you sell desserts has been possible. Having them as part of the streetscape makes some great photographic opportunities. On the other hand it doesn't necessarily mean that the Cuban economy is in good shape especially if the business isn't frequented by tourists. Associated Press reports that the Lack of Customers Dooms Many Small Businesses in Cuba.

Another issue that they face is that the rules keep changing. Some Cubans have used their life savings to carve out a little business in a room in their house by selling imported toiletries or imported used clothing. However, Labor Ministry official Jose Barreiro Alfonso recently told Communist Party newspaper Granma that it's necessary to "impose order" in the retail sector, and it will be a crime to "obtain merchandise or other objects for the purpose of resale for profit." So within the next few months they will have to close their business or face criminal charges.

That is what is happening to the common people but the Cuban government is doing big business developing tourism. The Havana Times reported on two huge business ventures, one with China and the other with the UK. That doesn't mean that larger businesses are without risk. The Cuban government has arrested and held several foreign business men for two or more years. The Canadian Broadcast Company reported that "President Raul Castro has said that rooting out rampant corruption is one of the country's most important challenges. Dozens of Cuban government officials and state company executives have been imprisoned for graft, while more than 150 foreign business people and scores of small foreign companies have been kicked out of the country."

The enterprising people who are starting small business out of their homes have my admiration. Doing business in Cuba, whether small or large is Risky Business.
Posted by Billie Mercer at 9:13 PM

Email ThisBlogThis!Share to TwitterShare to FacebookShare to Pinterest
Labels: Cuba