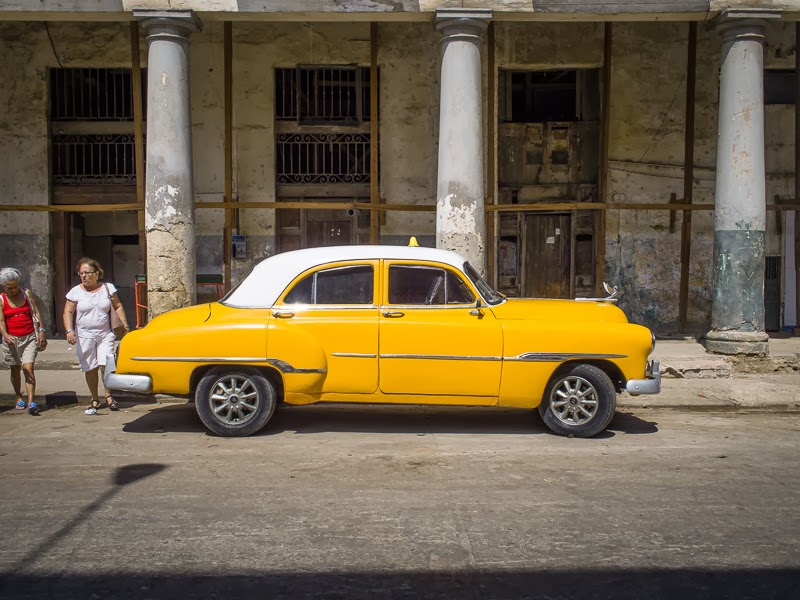 This photo is a good clue as to where I've been....Yes, Havana, Cuba. I was expecting to see cars from the 1950's but my expectations were exceed by reality. Most of them are brightly painted but their mechanical parts are a bit of this and a bit of that held together with God only knows what. The fact that they are still running at all is a tribute to Cuban ingenuity. Everyman is an auto mechanic. Seldom can you go for two blocks without seeing a car stopped with the hood up and someone fiddling with something.

The cars are used for public transportation. You can hire one as a taxi or they might just travel along the street and stop for individuals until the car is full. I don't know how the system works when they do this. Is there a route, or do the individuals have some hand signal for where they are going so that the driver knows whether to stop or not.

We had to hire three cars for our group to go to the airport which is a way from Old Havana. All three of the cars had some issue before they got us to the airport. The one that I was in died at a light. The driver tried to start the car several times. To me it sounded like the engine was flooded but what do I know. After about 10 minutes of this, I was thinking we were going to have to get out and flag down another taxi to get to the airport. But just before the light changed again the driver floored the gas petal and the car gurgled and shook and choked and finally a flood of black smoke poured out from under both sides of the car and it started again.

He deposited us at Terminal 2. We got our bags and walked into what seemed to me like an impenetrable crowd of people.
Posted by Billie Mercer at 9:13 PM