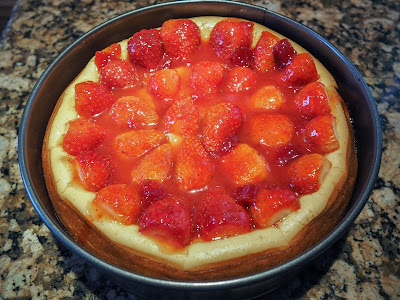 The first cheesecake I ever made was back in about 1979. I made it from a recipe that I got at a kitchen store in Houston named Drummond's. Drummond's has been gone for a long time but back in 1979 it was my Williams Sonoma store of all exotic cooking things. I picked up the recipe in the store and bought the pan to go with it. The cheesecake turned out fabulously, are least I thought so at that time, so that Christmas I gave my Sister-in-law, Betty, the cheesecake pan and the recipe. Somewhere along the way, I lost my recipe and I didn't remember that I'd given Betty the pan and recipe. Since the Internet came along I've even done a few google searches for the Drummond's cheesecake recipe but no luck.

I was at Betty's for Christmas dinner this year and she pulls out this faded recipe with splatters and the edges of it are disintegrating. She wanted me to help with the glaze for the cheesecake she had made. She had my recipe! Well, not MY recipe but a copy of the recipe. I made a copy of her faded recipe and as soon as I got back to San Miguel I retyped it. I wanted to try it out to see if it was still as good as I remembered it so I made it for a New Year's Eve Party at the home of some friends.

As usual in Mexico, you have to make a few adjustments. I didn't have Graham crackers so I used the Maria cookies for the crumb crust. Cream cheese packages in Mexico are not 8 ounces but 190 gr. or 6.5 ounces. Another problem I had was I have a 9 inch cheesecake pan and it would have cooked better in a 10 inch pan like the recipe calls for.  Although the recipe says to use a food processor, you need a large bowl food processor because the cheese and sugar filled my processor bowl and I had to transfer the mixture to my stand mixer to add the eggs and other stuff. The cheesecake is rich and it will serve 12 to 14 not 8 to 10 unless they are eight teenage boys.

Crust
1 package graham crackers (I used Maria’s cookies, Need about 1-1/4 cups of crumbs)
1/4 cup sugar
6 T melted butter
½ cup pecans or walnut pieces
Use steel knife. Turn on Food Processor.
Drop Graham crackers through the feeder tube.
Add Sugar. Pour in melted butter.
Add nuts.
Process 5 more seconds.
Stop!
Press mixture into bottom of the lightly greased 10" cheese cake pan. Refrigerate while mixing filling. (Cooked mine in 9" pan because that was all I had. 10" would be much better.

Filling
5 packages (8 oz. Each) cream cheese (Mexican Philadelphia cream cheese is only 6.5 ounces so you need more than 5 packages)
1-3/4 cup sugar
1/4 cup flour
2 egg yolks
5 eggs
peel of 1 lemon (I used the peel of a lime because I didn’t have a lemon)
1/4 cup heavy cream
Use steel knife. Turn on Processor and alternately add 2" chunks of cream cheese and 2 T sugar until all cream cheese and sugar are in work bowl.
Add Lemon Peel. (Don’t worry about grating it. The steel knife will do the work!)
(This is the point that I had to transfer the mixture to the stand mixer.)
With the processor still on. Drop egg yolks and then eggs, one by one into work bowl. (Stop at least once and scrape down sides.)
Add the flour immediately followed by the cream. Process 5 more seconds. Pour mixture into cheese-cake pan.
Bake at 475 degrees for 10 minutes. Reduce heat to 250 degrees continue baking for 1 hour 15 minutes. Turn oven off. Open door and let cheesecake set in open oven for 30 minutes. Remove from oven and cool to room temperature.
Decorate top with concentric circles of fresh strawberries and or sliced peaches.

Topping
1/3 cup strawberry jam or peach jam (I only had Strawberry Preserves)
3 T Cointreau or brandy (I used Presidente Brandy)
1 T cornstarch
Heat in small saucepan. Pour over fruit. Refrigerate at least 6 hours prior to serving! 8 to 10 servings.

Posted by Billie Mercer at 8:52 PM