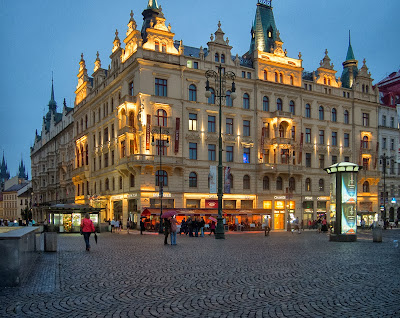 I did a little more than pass through Prague. I was there for five days and I loved the city, the capital of the Czech Republic. I'm not the only one who loves it because there were thousands of tourists there at the end of August. The Old Town is well preserved and the New Town had wonderful Art Nouveau architecture. Then there was the brutal gray architecture from the Communist period.

A few things surprised me. Everyone seemed to speak English, most of them very well. I only ran into one lady who sold drinks and snacks at a little kiosk in an office building that didn't speak English but we managed to communicate anyway. People were also helpful. One day I wanted to take the tram up to the castle. I found the street but I wasn't sure which side of the street I was suppose to be on to go up the hill. I asked two ladies. It turned out that both of them were Czech but one of them now lived in Australia. They took me under their wing and made sure I got on and off of the tram at the right places.

I had expected the food to be more to the sauerkraut and dumplings side but that wasn't the case at all. I ate at several cafes near my hotel and the food was varied and really delicious. One night I had a pizza and it was a really, really good pizza. I don't know if it was because I was so hungry or it was really that good but it was a great dinner.

I found that the places I wanted to see were all within walking distance...that is if you are into walking several miles in a day. The St. Vitus Cathedral and Castle was huge and I wish that I had purchased the audio guide. After I left there I found the Lobkowicz Palace and with the admission you also get the audio guide. That was one of the highlights of my trip to Prague.

One thing I wish I would have done is add a few more days to my stay in the Czech Republic and have gone out in the countryside. There are a number of medieval towns that I would have liked to have seen. Certainly, I would have planned to overnight a night or two at Cesky Krumlov.

If you want to see a few of the pictures from Prague click here.