A Part of My Life 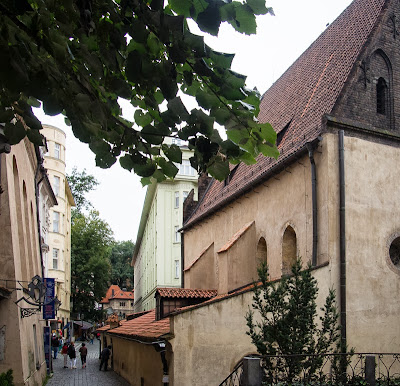 While in Prague I wanted to go to Terezin which was an old fortress town about an hour outside of Prague built in the 1780's. About 7,000 people lived in the town when during World War II the Nazis moved them out and began using it as a concentration camp for Jews. This was the Nazi "model" Jewish town that they used for propaganda for the Red Cross and the world. In actuality, tens of thousands of people died there, some killed outright and others dying from malnutrition and disease. More than 150,000 other people (including tens of thousands of children) were held there for months or years, before being sent by rail transports to their deaths at Treblinka and Auschwitz extermination camps in occupied Poland, as well as to smaller camps elsewhere.

You may be wondering why I'd want to go there. I was a young child during World War II but at the end of the war the news reel pictures at the movies and in Life Magazine of the Prisoners of War and the Jewish Concentration camp survivors was printed in my brain. I also remember something about the trials of the Nazi war criminals. Oh not the details but it is a part of my history. So I wanted to see a Nazi Concentration Camp.

Terezin is a day trip from Prague and in the end I decided to hire a guide to take me through the Jewish Quarter in Prague. My wonderful guide was a Jewish woman whose parents had survived so my half-day tour was more like a first hand account of  the Nazi Holocaust and life under Communism.

The Jewish Quarter in Prague is really very small. The picture above is one of the walkways into the Jewish Quarter. There are several Synagogues, one of them is the oldest in Eastern Europe built in 1270. Those synagogues within the Jewish Quarter are museums and memorials to the Jews who lost their lives in the Holocaust. This picture is just a tiny piece of the walls in one of them where their names are recorded. It is set up by family name and then the members of the family. Sometimes it was name after name in one family. Being surrounded by these walls of names was emotional for me. 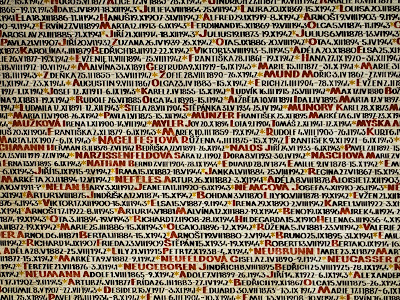 Another thing that hit home with me is that women were only allowed into a back space or upper gallery which was usually mostly concealed. Another reminder about the status of women throughout most of history. 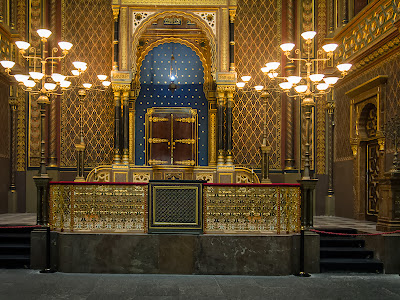 This beautiful Moorish-style synagogue was built in the 1800's and has been loving restored since World War II.

My guide told me that most people in the Czech Republic are not connected to any religion, or as she put it, few say prayers. There were some 120,000 Jews in the area in 1939. Just 10,000 survived the holocaust. Today only 1,700 people "register" as Jews in Prague. There are probably more but after their experiences in the Holocaust and Communism they do not proclaim their religion.

I was surprised at how this trip turned out to be such a reminder about World War II. It is time to pull out a few history books about the period and put some events and places in perspective. I'll be writing some other entries about how places reconnected me to this part of my lifetime.

Posted by Billie Mercer at 2:33 PM