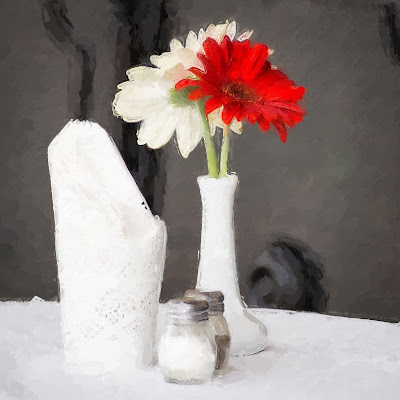 Some people say their dreams are in vivid color that play across their mind or subconscious like a movie. And the next morning when they wake up they can tell you about the dream in detail.

Do you remember your dreams? Most of the time I don't.

But last night....last night was different. Well, actually it was early this morning in that kind of twilight between sleep and awake. I realized I was in a dream. The early part of the dream is very fuzzy but there was a connection between this woman and a man. They are upstage left in a restaurant. They could have been a husband and wife at a table or maybe the chef and the woman who took care of the front of the restaurant. Like I say, it is fuzzy.

Then the dream becomes very vivid. Two women walk in downstage right. Both attractive. One with blond hair back in a bun or french twist. She was wearing a simple 1930's bias-cut dress in white wool jersey. The other was in a stylish fitted royal blue suit with a short but not short-short skirt, deep neckline and a large Kate Middleton hat set at a jaunty tilt.

Next the three women are seated at a table center stage. There is a bit of small talk. Then the Kate Middleton hat lady pushes a small envelope toward the restaurant woman. On the front of the envelope is written a large sum of money and something like "Take it and leave now." The restaurant woman reacts with shock. From that point on, if I would have had a pencil I could have been writing dialogue. The words were just pouring out although now I can't remember exactly what they were.

Was this a pay off for a mistress or wife? Was it the old corporate golden handshake, take your severance and go?

Why did I have this dream? What does it mean? Does it mean I need to go shopping for some fashionable clothes or get a new hair style? Or, is it a plot for a 10-minute play? Maybe the muse is channeling a great novel or screen play and I need to be ready. Should I go to bed tonight with a pen and pad in my hand ready to transcribe? You never know about these things.

Hey, it is my dream so stop it!  I can hear you laughing!