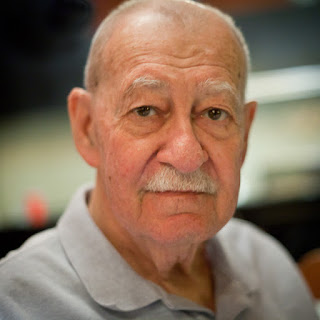 I have this picture of Ned framed and hanging in my bedroom. I talk to him every night before turning out the lights. Not all of the readers know My Ned and so I'd like to tell you a little about him.

Ned was a native Houstonian. When I first met him, he was a big man on campus at Milby High School in Houston. He won a bunch of awards for academics and sports. He played a mean game of baseball for Milby as well in several city leagues. Now he has a couple of grandsons who have inherited the baseball genes. He was also a champion bowler and participated in amateur and semi-pro bowling leagues and was in a number of State Championships.

After graduating from the University of Houston with a degree in Chemical Engineering, he worked for C P Hall Company until he retired. He was in technical sales and business development. During the last 10 years he was with C P Hall he developed distributorships for the company in Mexico. While a deacon in our church, he headed up several big building projects. At Champions Golf Club, he was on the Board of Directors. He was always involved in the things his boys did like little league and Indian Guides.

He was married to me for 55 years. He was Dad to three sons, Ned to two daughters-in-law and Pawpaw to four grandsons, Bubba to his sister. After a three year battle with lung cancer, he passed away June 23, 2012 surrounded by our family. 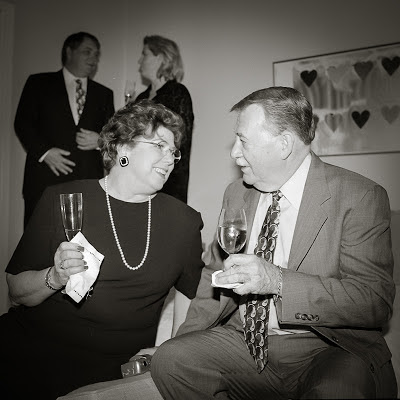 40th Wedding Anniversary
That is the abbreviated version but there is so much more to Ned Mercer.

I wish we had recorded his eulogy in Houston. It was given by a long time friend, Jerry Stovall. I dated Jerry in Jr. high school and when we went to high school, Jerry and Ned met and became best friends. Jerry, who has a gift for public speaking, says that Ned is still his best friend.  He told some stories about Ned that had our friends who had lived through some of the shenanigans laughing and the grandsons giggling and then taking a peak at me to see how I was reacting and to be sure that their Pawpaw really was such a wild and crazy guy.

Jerry set Ned and I up on our first date. I was angry with some boy and told Jerry I needed a date to show off with at some school function. So, Jerry said, "How about Ned." I said, "Ned who?" Jerry said, "You know the guy that has those leopard shoes."

I know that many of you remember Ned in baggy cargo pants and faded T-shirts but I have to tell you the man was a dresser until he retired. Back in 1954 the stylish thing was to wear "drapes" which were pants with lots of pleats around the waist and a kind of pegged trouser leg. That was Ned.... tailored drapes and leopard shoes and a perfect flat top hair cut....which was different from a crewcut.

After we married, I worked full time while Ned studied Chemical Engineering at the University  of Houston and he worked part time. After Mike was born, I stayed home with the baby and Ned worked 40 hours a week on the night shift at Goodyear Rubber Plant and went to school in the daytime and carried 18 hours a semester. He didn't graduate at the top of his class but he did damn well. Looking back I have to wonder how he did it. He was a very smart man.

He loved traveling especially in Mexico. Our first trip to Mexico was about 1972 to Acapulco. We went with four other couples and stayed in John Wayne's house on a cliff overlooking the ocean. That was the beginning of our fascination and love of Mexico. We saw most of the Mayan ruins in Mexico as well as most of the 16th century churches.

If I thought up some place I wanted to see or photograph, Ned would get maps and start figuring out how to get me there. He was a map man. He always supported my photography and was my navigator, travel director, photography assistant, driver, tripod carrier and translator. 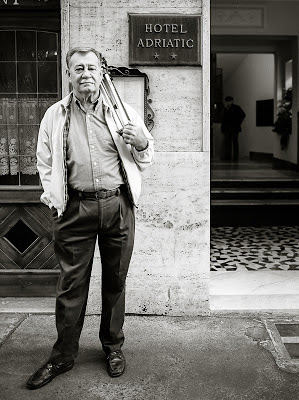 After renting in San Miguel de Allende a lot of times, we bought what we were thinking would be a second home. Once we decided to live here full time, I wanted to buy a different house. Not Ned. He liked being in a very Mexican neighborhood. He liked talking to his Mexican neighbors, hearing the roosters, the trucks and when some of the teenage boys got drunk and got into fights in the street and the police came, it gave him some great stories to tell.

He loved figuring out how things worked in Mexico. And a lot of people came to depend on his knowledge of how to get things done. One of his dreams was to become a Mexican citizen or permanent immigrant. He achieved that dream a few months before he died when we came back to Mexico in the middle of some tough chemo. He was granted Permanent Immigrant Status.

Ned was always the same even during the three years he was fighting lung cancer. Optimistic, even tempered, gentle, unpretentious, warm sense of humor and wanting to spend time with family and friends. He was a very special man. There really aren't any words to tell you how much I miss him but it seems like when I need him the most I find he is still with me.

Posted by Billie Mercer at 3:12 PM

Email ThisBlogThis!Share to TwitterShare to FacebookShare to Pinterest
Labels: Ned