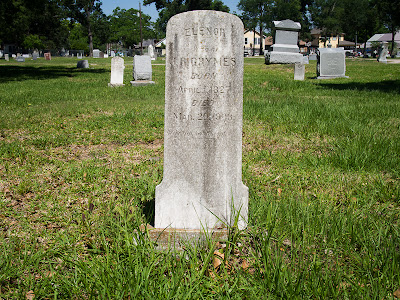 This week I drove to Eastwood where I own a vacant lot on Rusk Street. I've driven around the area many times but for some reason I had never driven South of Dumble Street on Rusk. Just four blocks South of my lot, Rusk dead ends into Altic Street and there in front of me was a cemetery. I never pass up a cemetery especially one that looks like it has old tombstones in it and I could see some old tombstones.

The one I photographed above reads:

ELENOR
wife of
J. R. GRYMES
BORN
April 1, 1827
DIED
March 20, 1903
There were quite a few tombstones with similar kinds of dates. The oldest burial I found was in 1895. But about half of the cemetery was colorful with balloons and flowers from Mother's Day. The tombstones and the decorations in that section had a very Hispanic flavor and there were some recent graves.

Thank God for the internet. As soon as I could I looked at a Google map and found that the cemetery was called Evergreen Cemetery. Then I googled Evergreen Cemetery Harris County Texas. There it was. Even a short video about someone who was helping preserve the cemetery. Even better, here is the text of a Historical Marker which I didn't find while I was walking around but it gave me the background of the Cemetery.

The Evergreen Cemetery Association organized in 1894 and purchased 25 acres at this site to establish a cemetery. The first recorded burial was that of the infant Nellie Storkes on October 4, 1894. Charles Hooper replaced first sexton Joseph Grenedig in 1898 and served until 1924. He was succeeded by his son, James, during whose tenure (1924-1936) 10 of the original 25 acres were sold. Hooper family members cared for all or part of the cemetery until 1984. Three distinctive ethnic burial arrangements exist here. Southern folk burial sites are often subdivided by families and enclosed by a fence with an arched gate. German families are buried together and their grave stones decorated by fine craftsmanship. Rows of evergreens and crepe myrtles often separate the German sections. Hispanic grave sites tend to be individually situated and decorated with floral arrangements. Among those buried in the cemetery are veterans of conflicts ranging from the Civil War to World War II, city and county officials, and local labor group and fraternal organizational members including the Masons, Odd Fellows, Knights of Pythias, and Woodmen of the World. The cemetery is maintained by an association comprised of descendants of people buried here.

I've lived in Houston for most of my life but it seems like every time I go exploring I find a place that I didn't know anything about. I love that.

UPDATE: More information about the cemetery here.
Posted by Billie Mercer at 9:52 PM