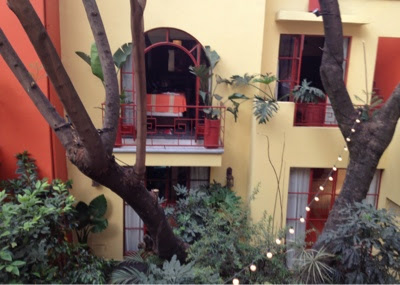 The Big Enchilada, also known as Mexico City. Home to 22,000,000 Mexicans. That is where I was this past weekend. I love to go to Mexico City and my dream is that one of these days I'll rent an apartment there for a few weeks so I can get to know the city better, buy in the mercados, visit more of the amazing museums and walk the neighborhoods. This time I went with a group of eleven friends and we stayed at The Red Tree House, which was Tripadvisor's Winner of Traveler's Choice award for 2013. I've stayed there several times before and I love it but for the rest of our group it was a first time.  It is in Colonia Condesa, just a half block from Avenida Amsterdam and another block away from Parque Mexico. The neighborhood is full of art deco houses, small restaurants, coffee houses and shops.  I love walking there and in Colonia Roma which is adjacent to Condesa.

One of the things we did while we were there was go see Frida Kahlo's Blue House. I had been there before but I wanted to go again because Diego Rivera had put all of Frida's personal belongings away under lock and key after her death and it was only recently that the personal items were retrieved. The exhibition is called "Appearances Can Be Deceiving."

The exhibition was amazing. I've long admired her work and saw the huge exhibition of her work in Bellas Artes in Mexico City about five or six years ago. I saw the movie Frida. I've read books about her and about Diego Rivera. But seeing her clothing and personal items brought a different prospective to what I knew about her. I think the exhibition will be up until November and if you are in Mexico City it is a must see.

We also ate at some great restaurants. One of them was the San Angel Inn that was constructed in 1692 for a carmelite monastery. It had a most interesting history before becoming a restaurant but it has been a restaurant for many, many years. Still it is top-notch. There isn't a thing about the decor or the service that looks time worn. One of the things that I remember from years ago was the way they serve Margaritas. They deliver the salted glass and a silver decanter sitting in a small silver bucket with ice. I was so glad to see that the ritual has not changed.

Another restaurant that was quite fun was Nueve Nueve in Casa Lamm. Casa Lamm is a old mansion that now houses an art school, bookstore, galleries and the glassed-paneled restaurant is nestled into the garden so that it feels like you are sitting in the garden having a great meal.

I  also ate at MeroToro and Contramar both of which I would highly recommend and they are in walking distance of The Red Tree House. It was a great weekend. Now I just need to figure out when I can get reservations at The Red Tree House again and go back. And you, dear reader, this could be the starting point for your itinerary for a trip to The Big Enchilada.

Posted by Billie Mercer at 4:28 PM