My Life as an Actress

I'm going to reveal a secret from my past. My far distant past. I was a thespian in high school. If memory serves me, I was even a member of the International Thespian Society, an honor society that promotes excellence in high school theater. Oh yes, in Junior High School (now called middle school) and in High School I was an Actress...yes Actress with a capital A. I was even in a few plays produced by some city organization. But that was long ago and far away.

It is said that sometimes as we grow older, we enter our second childhood so last Fall when I saw an advertisement announcing some acting classes, I signed up. It was fun when I was a teenager so I thought it might be fun now and besides what did I have to lose. I probably would not know a single soul in the class. Sure enough I didn't know anyone in the class. I found out that I still liked to read scripts but not enough to try out for play readers. My little excursion into acting was fun and done.

Then a few weeks ago I had a message on my answering machine from someone named Christine Foster. She said she was a director and she had heard about me from someone in the acting class and wanted to talk to me about one of the plays in the Diez Minutos International Play Festival. Shock! Total Shock! 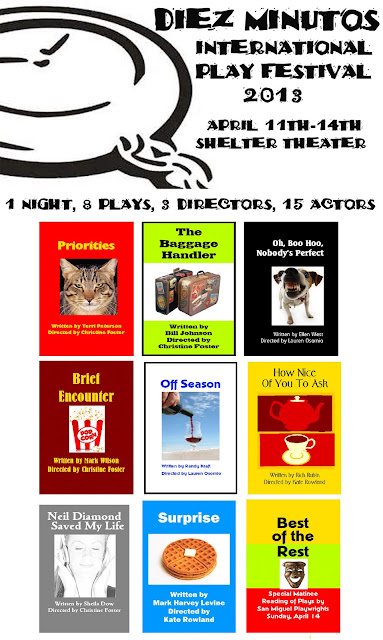 I called her back and told her that I wasn't an actress. I had not done a play since high school. I don't know what happened but by the end of the conversation I had an appointment to read for her. What can I say other than I've been trying to figure out why I agreed to do the play but I did. The name of the play I am in is Neil Diamond Saved My Life by Sylvia Dow. Today was the dress rehearsal and then Thursday, Friday and Saturday night....The show goes on!

Posted by Billie Mercer at 8:16 PM