The Week of the Dinner Party 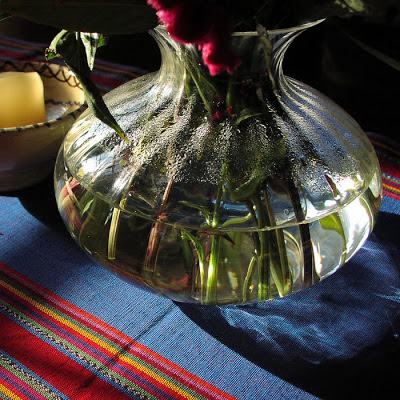 The Dinner Party....this one didn't go as planned and I was trying so hard to be prepared.

On a Monday before the dinner party on Saturday, I started my preparation. I had a couple of ideas in mind about the menu but I needed to know what I could actually buy in the stores, like ricotta  cheese or lemons, not limes, before I settled into one of the ideas. So Monday, I walked to Mega where I found both ricotta cheese and lemons. I knew I could get everything else on my list. Now the menu was set and friends were invited.

But there was a hitch in my plans that started Wednesday evening. I was walking by the house next door on my way to dinner. Their door was open and several members of the family were standing outside the door. One of their three dogs was standing in the doorway just looking out. He was calm....just looking, but just as I passed the doorway, he jumped at me and bit my thigh. I screamed and the family came running to help me. They brought peroxide, alcohol and cotton balls to clean the wound. I had three puncture wounds. They asked me if I wanted a doctor. I said no. As soon as my shock and shakiness passed, I went on to dinner.

The next day, Thursday, was busy. I went to Yoga, I went to the bank, I went to the liquor store and bought a case of wine to be delivered on Friday. I stopped at the bakery and bought bread. I bought some tomatoes to roast and apples for a dessert for the dinner. I'm checking things off my prep list. But my leg is a little sore and a bruise is beginning to show up.

My prep plan was that on Friday, I would go buy the rest of the veggies, flowers and a couple of other things I needed. That way I could get the flowers arranged and the veggies washed. The table set, the tart crust made, the tomatoes roasted, the hummus blended. As much as possible done so that on Saturday all I would have to do is walk down to the mercado and buy my chicken and finish up the rest of the meal.

It didn't work out that way.

Just before I was ready to leave to go do my shopping on Friday, I sent an email to Norma, my House Manager, that I was about to leave the house but I would be back about 11:30 and would she please stop by to talk with me. I wanted to find out if the dogs next door had their vaccinations or not and how I should handle this situation. I've lived here 11 years but I do not understand so much about the Mexican laws or the culture. Norma is Mexican and so I wanted her advice and maybe even her help in talking to my neighbors. Ten minutes later while I was in the bathroom brushing my teeth. Norma is ringing my doorbell.

I told her my story.

She immediately called Ecologia......and there went my day. About 15 minutes after Norma left, a man from Ecologia came and asked me questions. I was mostly understanding his questions but I don't know whether anything I said in my broken Spanish/English made sense or not. He told me he was going next door to talk to the neighbors but he would be back. So now I wait. I peek out my window and I see him put the dog in a crate in the back of his truck. Finally he comes back and he tells me that they are taking the dog for observation. He gets his boss, who speaks English, on the phone and he  tells me that I have to come to Ecologia on Monday at 2:30. He gives me no time to ask questions, just be there!

The man from Ecologia leaves. Now it is almost 12 PM. I was told that the wine could be delivered between 12 and 2 on Friday. So I still can't go to the store because if I miss the delivery who knows whether or not I can get it delivered on Saturday. I'd like to call them but there is no phone number on the receipt or in the phone book. So, I wait and wait.......and wait. But while I'm waiting I do get the tomatoes roasted and the tart crust started and in the refrigerator.

Finally at almost 3 PM the delivery guy shows up. Too late to get flowers or veggies from in front of Espinos. Well maybe I can salvage some time if I go buy my chicken. I don't have a lot of time because by 5:15 I have to be ready to leave for a party. But I walk down to the San Juan de Dios Mercado. I walk to the aisle where my chicken lady is. The stall is closed and there is water all around it so she must have just closed and washed everything down. Maybe I can at least get my romaine lettuce and celery. That will help some with prep tomorrow if it is already washed. None of the stalls have any romaine and the celery is limp. I start back home and I'm getting a little stressed, actually more than a little. Then I pass another chicken store where I have bought chicken before. Ahhh....I was able to get my chicken. I rushed home, stowed the chicken and went up to shower and get ready to go to the Friday night cocktail party.

Saturday morning the maid comes. Having the maid on the day of a party is good planning isn't it? She is going to give special attention to the patio because I would like to sit in the patio a while before dinner. I'm chomping at the bit. Ready to get on with the shopping and cooking. I arrive down by Espinos about 10. The flower man has just arrived and the flowers aren't out. The veggie man isn't there at all and the olive oil store sign says it doesn't open until 11. I kill time in Cafe Monet with a hot chocolate. Finally the flower and veggie man are open but I still have to wait for the olive oil store to open.

I head home to find a message on my phone that one guest that wasn't going to be able to come now can come if I still have room. I don't think I have enough chicken but they bring me some more chicken so that doesn't turn out to be a problem. By this time the maid has left. A little norther is blowing in....as in the wind is really blowing leaves and twigs out of the tree in the patio so between the cold and the wind, there goes the plans to sit in the patio.

Since I like to try new recipes, my guests end up being my guinea pigs. The NYTs recipe I wanted to try looked so good, polenta layered with spinach and cheese then baked. Sounds good doesn't it? I tasted it while I was putting it together. It was bland. I added salt, pepper, cayenne but I never moved it beyond bland. I think that the idea of it still intrigues me but if I did it again, I'd add some cheese to the polenta and some sauteed onion to the ricotta/swiss-cheese/spinach mixture.

I guess that now you are thinking I'll tell you that the party turned out okay. Not quite! One of the guests had not felt 100% before she arrived and within an hour, before we even sat down to the table so it wasn't my food, had to call a cab to go home.

Actually, the dinner party did turn out okay. We had a lot of good conversation and just about all the food was gone except for that damn polenta dish. I still had about one-half of it.

Posted by Billie Mercer at 9:28 AM