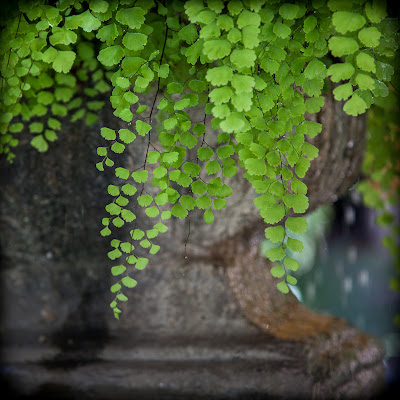 The normal definition of Survivor's Guilt has to do with someone who feels guilty that they survived in combat or a natural disaster, a widespread layoff or some such major catastrophe. However, I have to tell you that not only I, but several of my friends who have lost spouses, have felt guilt about living and enjoying life after the spouse is gone.  I don't know whether that fits the psychological definition of Survivor's Guilt or not but it is a real feeling.

Maybe, these lines from  the song "Empty Chairs at Empty Tables" in the musical  Les Misérables express it best:

I've told my family and friends that I feel guilty about still being here and enjoying life without Ned and they have all told me that I shouldn't feel that way. That Ned would not want me to be unhappy. I heard what they said but I have still felt a heavy overcoat of guilt.

Sunday was a lovely day. I was in San Miguel. The sun was shining. The skies were blue. The Jacaranda was in bloom. It was Palm Sunday. Ned and I always went into town to see the Processions. Today the Processions were wonderful and I photographed them and talked with friends I met along the way. Then I had a iced coffee at Starbucks and sat in the lovely patio of the old colonia building that houses Starbucks.

My heart was singing and I was happy until the tape started playing in my head about how could I be happy when Ned wasn't here to enjoy this beautiful day with me. But then I heard a voice that asked me, "If you had died first, what would Ned be doing?"

What would Ned be doing? He would be here in San Miguel. He would be going to the gym three days a week. He would be on his computer. He would be going out with friends. He would be taking care of house repairs and watering plants. He would cook breakfast  for himself and sometimes dinner. He would have the car here and he would drive to Costco and Home Depot in Celaya or Queretaro. In the late afternoon he would sit up on the terrace with a drink in hand and watch the sunset reflections in the windows back toward town. And, I think, Ned would be asking some lady friends to go to gallery openings with him and out to dinner because he liked to do that but he would not do it by himself. He would be making a life for himself. Then the voice asked, "Isn't that what you would want him to do? To be happy?"

Suddenly I realized that Ned would want the same for me, for me to have a full and happy life. I know my friends and family told me that but now I've heard it from The Voice, really heard it, for the first time. I think that maybe I can now get past the guilt, not the grief, but past the guilt.

The image of the fern was taken in the courtyard at Starbucks. The fountain is always so fresh and tinkly (is that a word?) I always take a picture of it when I have my camera with me.

Posted by Billie Mercer at 1:44 PM