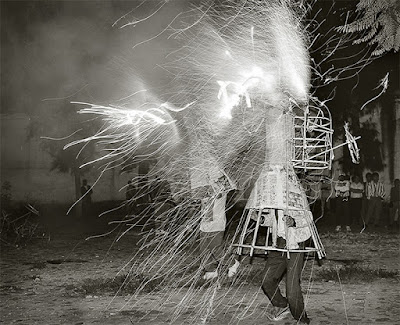 This week I had a panic attack. I was looking on my hard drive for a series of work I did in Pozas, the Surreal Garden. I didn't always keyword back sometime in 2000's and that was when the work was shot with a Holga camera and medium format film. So using keywords wasn't helping. Running through folder names wasn't working either. Oh, I have backup hard drives but the panic starts to set in. Could this hard drive be dying? What else could be missing? What will it cost to have it restored if it isn't on the other backup drives? That is, if it can be restored. Finally I noticed a folder name, FotoFest 2006. It was inside the folder for the year 2006. My file plan is to put images in yearly folders and then in sub-folders chronologically by date made. These images were not made in 2006 but I opened it and there were all of the images I had been searching for. I melted back into my chair.

I guess at the time when I named the folder, FotoFest 2006 and put it inside the year 2006 it seemed like a reasonable thing to do because these images made up my Goldesberry Gallery FotoFest show in 2006. But it wasn't logical in 2016. It gave me quite a scare. And it caused me to look back at old images just to be sure they were still there.

This particular scanned negative was made at a festival in Ocotlan in the State of Oaxaca in 1994. Twenty-two years ago and yet when I look at these young men running through the crowd with the fireworks exploding from the structures over them, I can still remember everything about that night.

I've been a photographer for a long time.

Twenty-two years ago. Isn't that something!