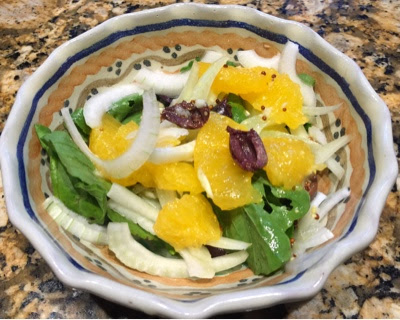 While I was in Sicily I had some good meals but overall I thought that there was more potential in the dish than the preparation presented. In the restaurants where I ate, I never had the feeling that there was a chef who was taking the traditional recipes and ingredients and re-interpreting them for today's taste such as we see with some of the innovative chef's in Mexico.

Sicily is an island so you would think lots of fresh seafood but just about every menu was limited to swordfish, tuna, octopus, squid and prawns. I was surprised because when we were in fish markets there was a wide variety of fish, most of which I didn't recognize from the Italian name nor from the look but certainly more varied than the menus reflected. There was always a dish prepared with squid ink. I tried a risotto in squid ink garnished with a marvelous Sicilian ricotta cheese. It was delicious but so filling that I probably only ate one-third of it.

Another thing about Sicily is that the country has been occupied by so many other countries that I expected more Middle Eastern  and African dishes. There were some items on the menus that included meats with fruits and nuts and if there were others they have been incorporated into our international cuisine to such an extent that I didn't recognize them as different.

Always on the menu were two salads. One was mostly lettuce with grated carrots, maybe tomatoes and olives. The other might include arugula and romaine lettuce with grated carrots, tomatoes, olives, corn and maybe another vegetable or two. The corn in the salad kind of suprised me but it was good. One day in a Sicilian restaurant in San Miguel I had a salad with oranges and olives and I don't remember what else but when I found an orange salad in Sicily, I ordered it. I was disappointed. It had slices of orange not wedges of orange and lots of olive oil but not a dressing.

I kept thinking about the orange salad and when I went to the Saturday organic market last week and I saw fennel and arugula I knew that I was going to make an orange salad. When I got home I looked up recipes for fennel, arugula and orange salads and found several. So the picture is my version of the salad with a dressing of orange and lemon juice, olive oil, a bit of diced garlic, a 1/4 teaspoon of mustard over fennel, arugala, onion, olive and orange wedges. It was good.

I'd like to have a Sicilian cookbook and I've been to Amazon to look for one. There are a lot of them but before I buy one I want to be able to at least look at the Table of Contents so see what is going to be included.

Does anyone have a recommendation for a Sicilian Cookbook?
Posted by Billie Mercer at 12:56 PM