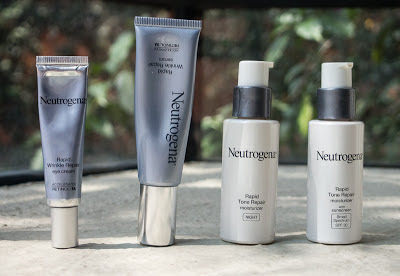 While I was back in Houston, I went to the Walgreen's that I use because I needed moisturizer, sun screen.....stuff like that. I had shopped in there before among the cosmetics and toiletries and had been helped by a tall woman with an Indian accent. But before, I had known what I wanted. This time I was going to check out some other products because the ones I was using were not keeping my skin moisturized in San Miguel's low, low humidity. Besides I had been using the same products for a long time. Maybe there was something better.

This time she saw me looking and reading labels so she came over to tell me that she had another product that had almost the same ingredients but it was on sale. Mmm....SALE. I like sales. I told her that I had been using the same product but I was looking for something better for the dry climate where I lived. She said that the sale product would be just perfect. I followed her to look at it. Before I knew it, I had bought eye cream, wrinkle cream, moisturizer with sun screen and a night cream AND then she sold me an exfoliating makeup remover with the money I had saved though the sale.

That afternoon my daughter-in-law, Betsy, had some friends over and we were talking. I told them about the saleswoman at Walgreen's. They all started laughing because they had similar experiences with her and they thought that she really knew her products and tried to find the best product at the best price for them. They thought she was an extraordinary saleswoman.

I would have never thought that an employee in the cosmetics at a local Walgreen's would have such a loyal following. She really was a born saleswoman.

Oh, did all the creams work? Well, my skin is definitely more moisturized. I think it is too late to help the wrinkles.