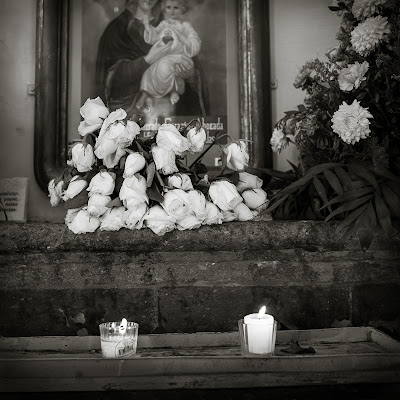 I'm not Catholic but the Catholic church has been a part of my life since Ned and I started coming to Mexico back in the early 80s. First it was my fascination with the churches strung along the old road between Cancun and Merida. Every little village had a church built on an elevated piece of ground. I quickly learned that most of these churches were built on the foundations of a Mayan pyramid. That led to some research and a five year photography project of 16th Century churches in Mexico.

During that long project I spent a lot of time just sitting in these churches as I waited for a Mass or wedding or a funeral to be over so that I could walk around and photograph without disturbing the people who were worshiping. I came to love that time of just being still and quiet in these amazing structures that were built and consecrated to God. After we came to San Miguel I continued to stop in one of the churches when I was in the Centro to just to sit and feel near God. It became my way of renewing my spirit.

This image was made in the San Francisco church this week. Wilting bouquets of white roses were on all the side altars, probably left from a wedding.
Posted by Billie Mercer at 11:52 AM